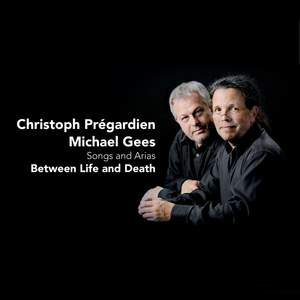 Between Life and Death - Songs & Arias

…far from being depressing, the programming here, both thoughtful and vividly imaginative, serves to stimulate the senses and lift the spirit. A fresh and unmannered introductory performance... — BBC Music Magazine, February 2010, 4 out of 5 stars More…

Weber: Recitative and Arie of Max from the opera, "Freischütz"

The selection of songs and arias on this double SACD set reflect on the fundamental question of life and death and cover a period of almost two centuries, the composers featured ranging from Bach through to Tchaikovsky. They are performed by one of the great lyric tenors of our age Christophe Prégardien, accompanied by the pianist Michael Gees. The common theme in the music of this recording is the most fundamental of all, existence itself, life and death. The composers represented are Bach, Mahler, Schubert, Schumann, Mozart, Brahms, Loewe, Wolf, Mendelssohn, and Tchaikovsky. The songs and arias performed here range over almost two centuries with eleven compositions and many musical forms, the simple song with piano accompaniment, the narrative, expansive ballad, the great opera aria and more.

Christoph Prégardien is widely regarded as among the foremost lyric tenors of our time and frequently collaborates with conductors such as Ricardo Chailly, John Elliot Gardiner, Nicolaus Harnoncourt, and Phillipe Herreweghe. He is represented on disc with more than a hundred and twenty titles, including most of his current repertoire. His recordings of German Romantic Lied repertory, particularly his recent releases on Challenge Classics of Schubert’s Die Schöne Müllerin, (CC72292), and Schwanengesang, (CC72302), have been highly acclaimed by the public and press and have received many major international awards.

…far from being depressing, the programming here, both thoughtful and vividly imaginative, serves to stimulate the senses and lift the spirit. A fresh and unmannered introductory performance of Bach's 'Komm, süsser Tod' leads with both tonal and spiritual ease into an equally direct rendering of 'Urlicht' from Mahler's Second Symphony - artfully and beautifully accompanied by Gees. with a quietly impassioned and sensitively paced performance of Mahler's valedictory 'Ich bin der Welt abhanden gekommen', the final track fades into thin air, concluding an anthology to savour slowly, and return to many times.

Such a programme demands exceptional resources in its singer, and there is probably no one presently more suited than Christoph Prégardien. His tenor, always centred as a high baritone, extends into the bass range right down to the low D of "Der Tod und das Mädchen". He can also call upon a silvery spiritual quality which serves well in songs such as Brahms's "Feldeinsamkeit" and as a final blessing over the whole recital in that last phrase of Mahler's "Ich bin der Welt abhanden gekommen". Michael Gees is one with the singer in the dedication of his own skills and in the imaginative sympathy that informs his touch.