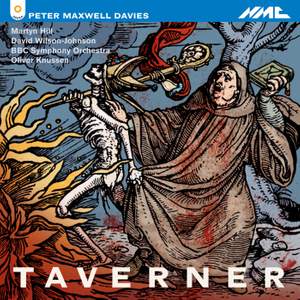 The opera is full… bitterly ironic juxtapositions, such as the 'holy' chanting from monks heard against the cynical Realpolitik of the negotiations between King and the Cardinal. Making the... — BBC Music Magazine, January 2010, More…

Act I Scene 4: The Throne Room: But this is not enough, John (Death, Richard Taverner, Rose, John Taverner)

Sir Peter Maxwell Davies was appointed Master of the Queen’s Music in 2004.

Maxwell Davies and Harrison Birtwistle studied together at the Royal Northern College of Music where they founded the contemporary music touring ensemble the Pierrot Players (later renamed The Fires of London).

Maxwell Davies Lives in Sanday in the Orkney Islands which are located off the northern tip of Scotland where the North Sea and the Atlantic Ocean meet. Orkney is an archipelago of 70 or so islands; just 21 of them are inhabited.

This release is of the landmark 1997 BBC recording featuring an astonishing line up of the cream of British contemporary music interpreters, alongside specialist period instrument ensembles Fretwork and His Majestys Sagbutts & Cornetts, conducted by Oliver Knussen. Although what is now known about the 16th-century English composer John Taverner differs considerably from the plot of this opera, the piece is both a fascinating study of an artist as a man for all seasons and an extraordinary indictment of the horrors inflicted on humanity by religion, or religious zealotry.

The Taverner of the opera abandons music to become a persecutor of the Catholic faith and thus betrays all that is good in himself. In Act 1 we see him being tried for heresy by the White Abbot and pardoned by the Cardinal (Wolsey) because of his music. In Act 2, which is a parody of the first, Taverner is trying the White Abbot, who is burned at the stake. That is the bare outline. A sub-plot is Henry VIII’s wish for a break with Rome in order to divorce Catherine of Aragon and the machinations of a Jester, otherwise Death, who controls Taverner’s fate.

The opera is full… bitterly ironic juxtapositions, such as the 'holy' chanting from monks heard against the cynical Realpolitik of the negotiations between King and the Cardinal. Making the dramatically effective needs a careful balancing of the textures, and here conductor Oliver Knussen proves just as masterly as one would expect. But he's equally good at bringing out the astringent and anguished lyricism of the music, particularly the orchestral interludes in the last Act. ...Stuart Cale as the Cardinal (later the Anglican Archbishop) stands out as particularly fine, relishing the unctuous cynicism of both of these fine prelates. In all, this recording is a wonderful achievement which does justice to a powerful, timely and humane work.

Of the stalwart team of solo singers, Martyn Hill, Quentin Hayes and Stuart Kale are particularly successful in their lyrical shaping of lines which can so easily become tortuously shapeless. …conductor Oliver Knussen keeps the goals in view and the climaxes in proportion, with the strings of the BBC SO tirelessly eloquent in the searing final stages.