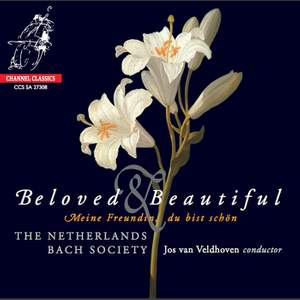 Hundreds of years before the birth of Christ, a collection of love songs grew up. Under the title of the “Most beautiful of songs”, they found a home in the Old Testament—it was Martin Luther who first gave them the name of “Song of Songs”—and since that time they have inspired and fascinated a vast number of theologians, mystics, philosophers, poets, painters, and, last but not least, composers.

Particularly during the Baroque period, these poetic, sensual, vividly descriptive texts were set over and over again to music, and they inspired librettists to expand on the original texts. Some of the most beautiful settings of the Song of Songs were produced in Germany.

Founded in 1921, The Netherlands Bach Society is the oldest Early Music ensemble in the Netherlands, and possibly in the whole world. Yet along with the musicians, its artistic director Jos van Veldhoven is still continually in search of contemporary ways of presenting this music, whether it be the traditional performances of the St. Matthew Passion in Naarden, other works by Johann Sebastian Bach (1685-1750) or music by his predecessors, successors, contemporaries and fellow spirits.

Beloved & Beautiful is the fourth cd in a series of songs, carefully chosen and combined because of the themes they represent. The programmes are often compiled in an original way and thus give a refreshing view of the various musical styles from Schütz/Monteverdi to Haydn/Mozart, as well as of the central composer Bach himself. The flexibility of the ensemble makes it possible to perform works from the secular and sacred repertoires in a great variety of combinations of musicians.

“the performance maintains the high standards established by the NBS and van Veldhoven in the Passions and Oratorio. Classical CD of the week The Sunday Times

“Dutch soprano Johannette Zomer leads a fine team of soloists with the society singers under their eminence grise, Jos van Veldhoven, in an ethereal version of this magnificent work, recorded with crystal clarity.” The Observer