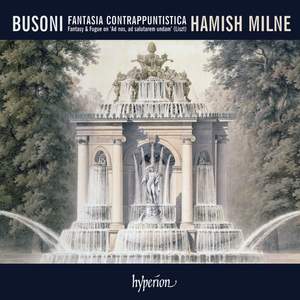 Busoni was not only one of the greatest pianists of his age but also a composer and theorist of daunting intellect. His three idols were Bach, Mozart and Liszt and this disc presents two transcriptions, and—in the Fantasia contrappuntistica—a colossal re-imagining, each paying tribute to the past while reflecting Busoni’s genius as both creator and re-creator.

The Fantasy and Fugue on the Chorale ‘Ad nos, ad salutarem undam’ is undoubtedly one of Liszt’s very greatest works yet as an organ piece it could be regarded as rather inaccessible to the general concert goer. Busoni’s magnificent piano transcription allows the work access to the concert hall; it remains a mystery why the piece has not been taken up by more pianists—perhaps its time will come.

In comparison the Mozart transcription is a much more modest, though perfectly realized, piece which gives much needed repose before the onslaught of Busoni’s pianistic magnum opus, the Fantasia contrappuntistica. This work has at its heart a realization of the incomplete final fugue from Bach’s Art of Fugue but seen in terms of twentieth-century harmony. The fugal sections are preceded by a chorale arrangement and interspersed with an intermezzo and variations; Busoni then creates an entirely new fugue on four subjects which Bach is thought to have planned, though he did not live to carry it out. In this work Busoni hoped to create ‘one of the most significant works of modern piano literature’. If its daunting complexity both for pianist and listener never make it a standard of the repertoire, it is certainly one of the most imposing of piano works and in this performance Hamish Milne has certainly created a landmark in his already impressive recording career.

Milne gives fiery, rhythmically taut readings of both big pieces, stressing their gaunt architecture while displaying admirable range of colour and touch which evokes the organ-like sonorities of the Liszt.

This daunting and inspired coupling is played by Hamish Milne with an uplifting musical authority.
Indeed, aided by Hyperion's superb sound (rich and resonant throughout the entire register), you are made to realise that the Ad nos Fantasy – a massive tribute to Busoni as transcriber – is not only among his finest achievements but (as Milne suggests in his accompanying notes) transcends Liszt's original organ work and seemingly takes on a life of its own.
The central Adagio in particular has all of Liszt's obsessive and ecstatic wheeling round an idea yet is unmistakably stamped with Busoni's own intimidating power. And it is here in particular that Milne offers playing of the rarest refinement and sensitivity before launching the final fugue in a blaze of virtuosity.
Busoni's Fantasia contrappuntistica takes such music to a further extreme. Among the composer's most formidable works, its colossal range and scope tell you that Busoni's music can seem like a mighty mountain range glimpsed behind clouds. Again, Milne's performance is of an unfaltering beauty and lucidity. As an extra he sandwiches Busoni's transcription of the Andantino from Mozart's Jeunehomme Concerto between these two peaks, a rarity where Mozart's sublimity is coloured by Busoni's altogether more forbidding personality. Milne may playfully claim in his notes that he would 'like to play like Bill Evans and Ahmad Jamal and sing like Flagstad', but we should surely be mightily grateful for his own unmistakable personality.

This daunting and inspired coupling is played by Hamish Milne with an uplifting musical authority.

Hamish Milne's performance [of the Fantasia Contrappuntistica] is wonderfully spacious. He completes his disc with equally convincing accounts of two of Busoni's homages to other composers high in his personal pantheon.