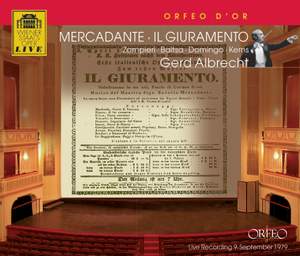 It is a truism that each evening in the theatre is a unique event that cannot be repeated, even as part of a run of performances. One such exceptional performance was the first of three concert performances of Saverio

Mercadante's rarely performed Il Giuramento, threatened with cancellation when the tenor scheduled to sing the main role fell ill and it seemed impossible to find a replacement.

In the event, Plácido Domingo sang the part flawlessly after only a day in which to learn the role, thereby underscoring what, even then, was the exceptional position that he has maintained in the operatic world ever since.