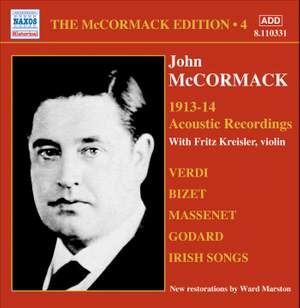 Alicia Scott: Within the Garden of My Heart

Ronald: Down in the forest

Cadman: I Hear a Thrush at Eve, "Serenade"

Jocelyn, Op. 100: Beneath the Quivering Leaves

With its focus on Irish songs and Victorian ballads, Volume 4 of the Naxos McCormack Edition completes the tenor’s 1913 recordings. McCormack was supreme in the world of song: he was praised by Gramophone for his “perfection of lyrical singing”.

Some of the ballads included on this disc belong to a world that, with the onset of war in 1914, was destined to disappear. Within the Garden of My Heart and Goodbye, Sweetheart, Goodbye are textbook examples of the flowery song so loved by Victorian audiences, while the 1913 Nearer, My God, to Thee resonates with the loss of the Titanic only a year earlier. Last but not least, this disc also includes five selections with McCormack accompanied by the legendary Fritz Kreisler playing violin obbligato from their first recording sessions in 1914.

Gramophone said of McCormack: “his ability to communicate the very heart of the music came into its own, whether it was Schubert lieder or a sentimental ballad – to him it was all equal if it had the power to move.”