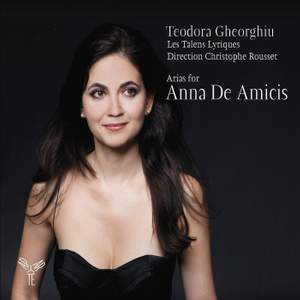 It's stylishly presented and excellently accompanied by the Talens Lyriques and Christophe Rousset; a slight letdown, though, comes with young Gheorghiu hersel. Her appealingly bright, agile... — BBC Music Magazine, March 2012, 3 out of 5 stars More…

This pre-classical programme is dedicated to Anna de Amicis, the famous soprano who first created the role of Giunia in Mozart's Lucio Silla. Besides works by the young Mozart the programme comprises arias by N. Jommelli, JC Bach, C.W. Gluck and others.

Teodora Gheorghiu made her debut at the venerable Vienna State Opera in 2004 where she was particularly commended for her performances of Adele (Die Fledermaus), The Queen of the Night (Die Zauberflöte), Nannetta (Falstaff), Fiakermilli (Arabella), Adina (L’Elisir d’Amore), Elvira (L’Italiana in Algeri), Sophie (Werther) et Eudoxie (La Juive).

Outside the opera house, her career has equally flourished in recital and concert appearances. Some of her most noted collaborations have been with Paul Goodwin conducting the Academy of Ancient Music in London and Sigiswald Kujiken conducting La petite Bande.

It's stylishly presented and excellently accompanied by the Talens Lyriques and Christophe Rousset; a slight letdown, though, comes with young Gheorghiu hersel. Her appealingly bright, agile soprano lacks polish...For the music itself, the disc is worth exploring, even if its interpretation tends to be undercooked.

[Gheorghiu] certainly has the requisite glittering coloratura technique. In accompanied recitatives, especially those for Giunia...Gheorghiu hints at the fiery temperament for which her predecessor was famed...In sum, a recital of mixed pleasures, longer on virtuoso brilliance than on imagination and involvement.

The recital is a tour de force, extremely demanding of Teodora Gheorghiu's technique...In the excellent recording, there is no suggestion of shrillness or thinness of tone as she takes on high Cs or a top D. Gheorghiu is more than a soubrette, for in its middle notes her voice has a warmth and a fullness...Her singing on this CD should spread her name, for there is some stunning vocalism.