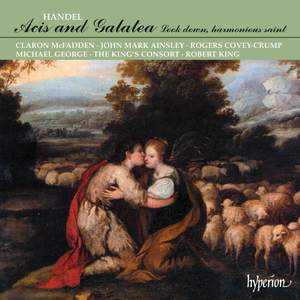 Part 1 No 10. Recitative. Oh! didst thou know the pains of absent love (Galatea)

Part 2 No 03. Air. O ruddier than the cherry (Polyphemus)

Part 2 No 04. Recitative. Whither, fairest, art thou running? (Polyphemus / Galatea)

Part 2 No 06. Air. Would you gain the tender creature (Damon)

Part 2 No 07. Recitative. His hideous love provokes my rage (Acis)

Part 2 No 11. Trio. The flocks shall leave the mountains (Galatea / Acis / Polyphemus)

A steady and lovely account, with Ainsley on top form.