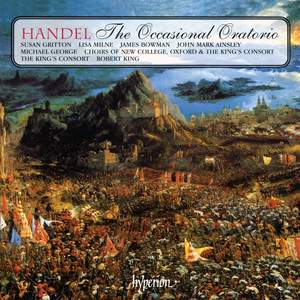 The occasion that called forth this work was the Jacobite rising of 1745 and its impending defeat. The Duke of Cumberland's victory at Culloden was yet to come. Handel, anticipating it, hit off... — Gramophone Classical Music Guide, 2010 More…

Act 1 No 03. Chorus. Let us break off by strength of hand

Act 1 No 08. Recitativo. The Highest who in Heaven doth dwell (bass)

Act 1 No 12. Aria. His sceptre is the rod of righteousness (bass)

Act 1 No 15. Recitative. Of many millions the populous rout (tenor)

Act 1 No 17. Recitative. Fools or madmen stand not within (bass)

Act 2 No 02. Recitative. Who trusts in God should ne'er despair (soprano)

Act 2 No 07. Chorus. All his mercies shall endure

Act 2 No 08. Aria. How great and many perils do enfold (soprano)

Act 3 No 05. Aria. When warlike ensigns wave on high (soprano)

Act 3 No 09. Chorus. Millions unborn shall bless the hand

Act 3 No 10. Recitative. When Israel, like the bounteous Nile (soprano)

Act 3 No 11. Aria. When Israel, like the bounteous Nile (soprano)

Act 3 No 13. Accompagnato. May balmy peace, and wreath'd renown (soprano)

Act 3 No 15. Chorus. Blessed are all they that fear the Lord

The occasion that called forth this work was the Jacobite rising of 1745 and its impending defeat. The Duke of Cumberland's victory at Culloden was yet to come. Handel, anticipating it, hit off the mood of the moment with a rousing piece full of appeals to patriotic feeling, partly through the traditional identification between the English Protestant culture of Hanoverian times with that of the biblical Hebrews. Much of the music comes from existing works, notably Israel in Egypt. The 'plot' pursues the familiar route of Anxiety-Prayer- Victory-Jubilation, but the work lacks the unity of theme and purpose of the great dramatic oratorios; if, however, you value Handel primarily because the music is so splendid you'll find a lot to relish here. King rises to the challenge of this sturdier side of Handel's muse and produces playing and singing full of punch and energy, and with that command of the broad Handelian paragraph without which the music lacks its proper stature.
The grand eight-part choruses, with the choir properly spaced, antiphonally, over the stereo span, make their due effect. King has a distinguished solo team. John Mark Ainsley's singing is particularly touching in the highly original 'Jehovah is my shield', where the rocking figures in the orchestra eventually turn out to symbolise sleep. Also very enjoyable is Susan Gritton's soprano, a sharply focused voice with a fine ring and due agility in the lively music and handled with taste and a keen feeling for the shape of phrases in the contemplative airs.
A fine set.