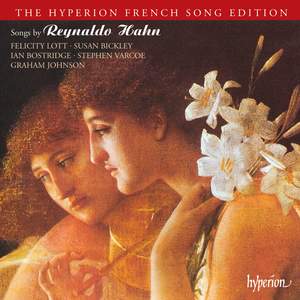 This two-CD set is the most representative recording of Hahn's songs ever made. It includes the complete Etudes Latines and Rondels (both with choir) as well as many of his most familiar songs.

The two cycles, Douze rondels and Etudes latines, are linked by a common fascination with the past.
The Douze rondels were composed to poems in a medieval metre, which allowed Hahn to try his... — Gramophone Classical Music Guide, 2010 More…

The two cycles, Douze rondels and Etudes latines, are linked by a common fascination with the past.
The Douze rondels were composed to poems in a medieval metre, which allowed Hahn to try his hand at pastiche madrigals and courtly ballads.
The Etudes latines cast their gaze back still further in time to Classical antiquity. For Hahn, that era seemed to represent the ultimate in purity and sensuality rolled into one. This collection of 10 songs is a real discovery and rivals late Fauré, both in its refinement and mesmerising simplicity of utterance. Apart from a few moments when one would like a more substantial tone, Stephen Varcoe's light baritone suits Hahn very well and he's a refreshingly unaffected interpreter, who sings with grace and feeling. Susan Bickley is better at the larger canvas of a piece like Quand la nuit n'est pas étoilée than the more intimate songs but the most celebrated pair of all Hahn's mélodies goes to Dame Felicity Lott, whose sympathy for the French style could have no happier outlet. Both Si mes vers avaient desailes and L'heure exquise are included here, the latter if not an hour, then at least two and a half minutes that are truly exquisite. They are both beautifully sung and are undisturbed by the discomfort around the top of the stave that sometimes mars Lott's singing elsewhere. At the end, she offers four operetta solos as an encore. Graham Johnson's accompaniments are as sensitive as ever. The piano could have been placed a little closer, but the voices have been well captured.

What treasures are here … The two discs provide an unmissable opportunity to explore a composer who is underrated and overlooked perhaps because he was too modest about himself. There are melodies here which Massenet, Debussy, Fauré and Ravel would have been proud to call their own. No one can fail to have their musical horizon broadened by these discs, which will assuredly come high among my Records of the Year, any year