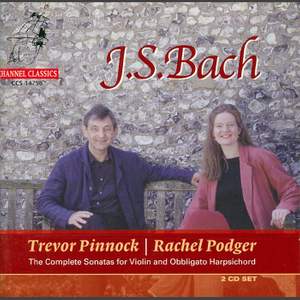 The Complete Sonatas for Violin and Obbligato Harpsichord

A recording of Bach's violin sonatas that really hits the spot. Rachel Podger has already attracted much praise for her recordings of the solo violin music, but is heard here to even better advantage... — Gramophone Classical Music Guide, 2010 More…

A recording of Bach's violin sonatas that really hits the spot. Rachel Podger has already attracted much praise for her recordings of the solo violin music, but is heard here to even better advantage in the Six Sonatas for violin and obbligato harpsichord, BWV1014-19, for which she's joined by Trevor Pinnock.
The two make a fine match. Both are uncomplicated, instinctive musicians with a sure technical command and sound stylistic sense, and in works as robust and complete as these, that's most of the battle already won. But this is also music of great poetry, and, without straining unduly to make their points, Podger and Pinnock bring this out superbly; Pinnock's harpsichord is gently resonant and softly voiced, and Podger coaxes a lyrical flexibility out of her violin, its singing qualities enhanced thanks to a restrained but telling use of vibrato – one which also enables her to play more consistently and blessedly in tune than almost any other Baroque fiddler currently in business.
It's difficult to single out details of this recording for comment; there just seems to be such a tremendous feeling of overall 'rightness' to it.
Maybe the finale of Sonata No 2 seems rather frantic and the wonderful Adagio ma non tanto of No 3 a touch lumpy, but there really isn't much else to criticise. And there are true gems to be enjoyed in the opening movement of BWV1014, where the violin makes an almost imperceptible initial entry, or the warm embrace of BWV1017's Adagio, or practically any of the sparkling fast movements, played with invigorating rhythmic drive and clarity.
This recording's closest period rival, that of Andrew Manze and Richard Egarr, shows a typical wealth of new ideas and inspired moves but is less satisfying as a whole, and suffers from some intonationally hairy moments and a less precisely pointed sound. The only period recording to touch Podger and Pinnock for technical assurance is that of Fabio Biondi and Rinaldo Alessandrini, but in both sound and interpretation it's heavy-handed compared with the spontaneous musicianship and airy texture on display here, and rather meanly it gives the six obbligato sonatas only. Though all the recent recordings of these sonatas have had their merits, this – two discs for the price of one – is, quite simply, the best yet.