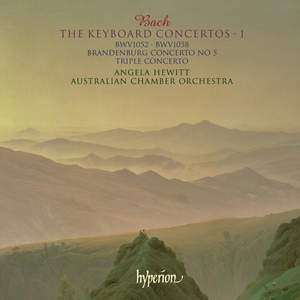 These are not entirely modern-instrument performances.
Angela Hewitt includes, as she says, 'a harpsichord in its traditional role as continuo'.
Combining old and new isn't unusual because in... — Gramophone Classical Music Guide, 2010 More…

Together with its companion Volume 2, these CDs contain all Bach’s extant concertos that feature a solo keyboard. Most were written in the 1730s and are thought to be arrangements of earlier concertos, many of which are now lost (though two will be recognized as Bach’s E major and A minor violin concertos and the sixth is an arrangement of the fourth Brandenburg). The fifth Brandenburg Concerto, with harpsichord, flute and violin soloists, dates from 1721 and is generally regarded as the first concerto for a solo keyboard instrument ever written. Bach made the keyboard part particularly brilliant and included a huge cadenza; he certainly knew how to establish a genre with a bang!

Hewitt’s Bach is by now self-recommending but only after playing Bach across the world with numerous ensembles did Angela decide that the Australian Chamber Orchestra were the perfect collaborators. After a month of concerts across Australia these recordings were set down in Sydney in February of this year and the frisson of artists operating at the peak of their form is clear for all to hear. One is immediately struck by the quality of chamber-music playing as phrases are passed from soloist to orchestra and, in the case of Brandenburg Concerto No 5 and the Triple Concerto, between all three soloists. Rhythms are buoyant, tempos lively, the spirit of dance is never far away in the fast movements and a perfectly vocal quality pervades the sung lines of the slow movements.

These CDs will surely be the jewels in the crown of Angela Hewitt’s magnificent Bach series.

These are not entirely modern-instrument performances.
Angela Hewitt includes, as she says, 'a harpsichord in its traditional role as continuo'.
Combining old and new isn't unusual because in the early years of period performing practices, the likes of Thurston Dart, Raymond Leppard and George Malcolm married a harpsichord to modern strings and wind. What's unusual here is the melding of two different types of keyboard, one sharply transient, the other ductile; and just how their functions dovetail with one another may be heard in the slow movement of the Brandenburg Concerto No 5. Hewitt also adds a cello to the continuo while contributing notes inégales, appogiature and other embellishments to her own line. The result is a potent artistic synergy between the musicians.
Hewitt doesn't slavishly follow a formula, though. In the Adagio of No 1 and the Adagio epiano sempre of No 3 (where she is most intense because both remind her of Passion music), she omits the keyboard's bass notes for the exposition of the theme but only in No 1 does she play them for its return at the end. In these instances, in the Andante of No 7 and elsewhere, she also varies the prominence of her left hand to give the ripieno string bass a strong presence too, while delineating the right hand melody most feelingly.
Interpretative decisions are intelligently applied; and Hewitt is at her best in the slow movements, all of which are played with the finest sensibility. If a more sinewy approach to a few of the outer movements might not have come amiss, her ability to gauge the critical notes of phrases so as to maintain an elastically accented rhythm offers ample compensation; and the consummate Australian Chamber Orchestra is with her every step of the way. The flute is placed backward in BWV1044 but otherwise recorded balance and sound ensure unimpeded concentration on the performances.
Small changes in level between some works are easily adjusted. A superb pair of discs.