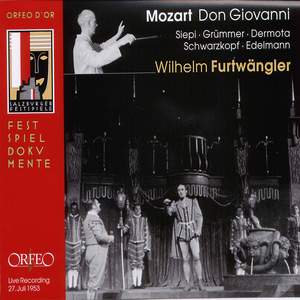 This is an immensely and immediately impressive performance… Furtwängler's interpretation of Mozart's equivocal opera is fraught with suspense, menace and… tension. Tempos are often on the... — BBC Music Magazine, May 2005, More…

This is an immensely and immediately impressive performance… Furtwängler's interpretation of Mozart's equivocal opera is fraught with suspense, menace and… tension. Tempos are often on the slow side, but the movement towards a climax is so inevitable that there is no hint of longueurs. And the cast throughout in this 1953 Salzburg Festival performance is on the highest level, down to the Masetto of the young Walter Berry, sounding as rebellious as Figaro at being bossed around by a nobleman. Cesare Siepi is an infinitely seductive Don, and his victims, actual or desired, are not only stellar but deeply inside their roles.

This 1953 version is probably the most satisfying we have of Furtwängler's Giovannis in the Salzburg series. 1950 brought together a more exciting cast (Gobbi in the title-role, Welitsch as Anna, Seefried as Zerlina and Kunz as Leporello) but is not so well recorded; 1954 has the same cast as '53, with the exception of Deszö Ernster who sings a disastrously wobbly Commendatore, but it doesn't lift as this does. The 'constants' in all three casts are Elisabeth Schwarzkopf and Anton Dermota, both of them unequivocal assets and consistent in their excellence over all three years. Cesare Siepi was a Giovanni to see as well as hear: his opulent, sonorous tone is welcome, less so its bassweighted character and his graceless way with the Serenade. Otto Edelmann's Leporello flashes vividly into existence as a character every so often and is always well sung. Walter Berry is festival-casting as Masetto, and Raffaële Arié, if not ideally empyrean, is more steady than Greindl (1950) who is firmness itself compared with Ernster (1954).
Elisabeth Grümmer's 'Non mi dir' is a comparable high spot, the slow speed probably working for her in the second half but posing a fearsome challenge in the first. This, however, is much her best singing; elsewhere she is often tremulous and even shrill. Of Erna Berger's 52-year-old Zerlina a listener might well suppose her a talented ingénue, and 'Vedrai, carino' goes particularly well at Furtwängler's comfortable andante.
And in the end it all comes back to Furtwängler.
Certainly this is Mozart viewed with fore-knowledge of Beethoven, whereas the modern approach prefers to look as from the 18th-century inheritance. Those who love the opera more than a particular conception of it will love this performance.