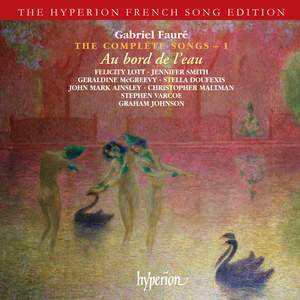 Few singers would give over a whole evening to Fauré's songs on the concert platform, and choosing a way of presenting them on disc obviously poses problems. Previous sets had all the songs in... — Gramophone Classical Music Guide, 2010 More…

Hyperions record of the month for January sees the launch of an exciting new series: the complete mlodies of Gabriel Faur will be released over four discs during 2005. This first disc takes its title, Au bord de leau, from the famous song which became Faurs calling-card, and presents a generous programme of mlodies of an aquatic nature. The songs are performed in the order of their composition (this rationale of chronology within a general theme will be applied across the other volumes of the series to make up four self-contained and individually satisfying recitals), and alongside several perfect miniatures we here encounter three of the major cycles: the five Venetian songs (to the poetry of Paul Verlaine), Lhorizon chimrique, and Mirages, written for Madeleine Grey in thanks for her advocacy of the cycle La chanson dve. Graham Johnson has employed a veritable panoply of artiststhe very finest interpreters of French song that could be found. Generous commentaries are provided for each song along with the original poems and English translations.

Few singers would give over a whole evening to Fauré's songs on the concert platform, and choosing a way of presenting them on disc obviously poses problems. Previous sets had all the songs in chronological order; others chose poets or moods: Graham Johnson and company have begun with songs about water. This means a lot of dreaming and melancholy, whether in Gautier's Chanson du pêcheur ('Ma belle amie est morte', also set by Berlioz), or Richepin's Aucimitière. The latter is given a most beautiful rendition by John Mark Ainsley, who otherwise only sings on two tracks, with Jennifer Smith in the sentimental Pleurs d'or, and the homage to Venice and its lovers in Marc Monnier's Barcarolle.
Three cycles are the main items here. Felicity Lott sings the Cinq Mélodies de Venise, which includes some of Fauré's best-known songs, 'Mandoline', 'En sourdine' and 'Green'. She brings to bear on them a lifetime's devotion to French song. Her other contribution is Au bordde l'eau, to a poem by Sully-Prudhomme. This is made to sound very sad; taken faster it can be quite merry; it's a celebration of love, as well as a meditation on the passing of time.
Stephen Varcoe sings Mirages, Fauré's penultimate cycle (1919). As Graham Johnson writes in his fascinating notes, these poems by Brimont permitted Fauré 'uneventful passion'. Christopher Maltman is the other featured singer, in five separate songs and L'horizon chimérique. All the performances are elegant and well-balanced, but one misses the extra slight note of acid that native French singers bring to Fauré's songs.
Hyperion's sound is impeccable and in both his playing and accompanying essay, Graham Johnson penetrates to the heart of one of music's most subtle and enigmatic geniuses.