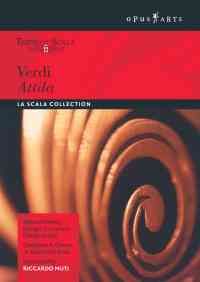 Spectacular and pacy, Attila fills the stage with barbarians, gives them good tunes to sing and places them in a busy world where every moment may bring a reversal of fortune. Moreover, the four... — Gramophone Classical Music Guide, 2010 More…

Riccardo Muti conducts a fine cast in the powerful and atmospheric 1991 production of Verdi’s ninth opera, whose story of the heroic tussle between Ezio, a Roman general, and Attila, the Nordic invader was written for the 1846 Teatro la Fenice season and premiered there to huge acclaim.

Spectacular and pacy, Attila fills the stage with barbarians, gives them good tunes to sing and places them in a busy world where every moment may bring a reversal of fortune. Moreover, the four leading characters are fired with passionate determination which in turn fires their magnificent voices. There is sure to be something to write home about after a good Attila. And this is a La Scala performance fully worthy of the great house and its best traditions. It is very much the kind of opera that thrives in Muti's care.
A hard, percussive energy plays off against long elegiac phrases, and the resulting tension, very Italian with its sense of personal suffering in the midst of great public events, permeates the whole performance. The singers match up to the challenge wonderfully well. Samuel Ramey's ironfisted voice is the perfect vocal image of the man, a voice with no flab, trained as by an athlete. The limitations are of tonal variety, in the dream sequence; but this is still a triumphant Attila. The soprano role of Odabella is as formidable as any in the Verdi canon, and Cheryl Studer masters it with astonishing assurance, and without the usual register-breaks and smudged scales. The tenor Kaludi Kaludov brings a clean, incisive tone and a well-schooled legato, and among all these foreigners Giorgio Zancanaro represents his country in its leading national opera house with a welcome infusion of Italian resonance and a reminder (intrusive aspirates apart) of the true vocal method of which Italy was for so long the fount.
Moreover, these individual talents come together as a well-disciplined ensemble, and the concerted numbers have the authentic thrill of Italian opera in best working order.

The relative brevity of the piece...makes a strong impact on DVD, in a production with traditional costumes and using minimal but atmospheric sets. [Ramey and Zancanaro] are ideally cast, with Cheryl Studer also outstanding as Odabella.