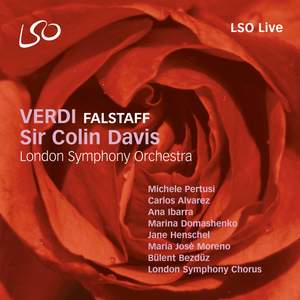 By all accounts the performances at the Barbican were among the most enjoyable of their kind in London for a long time, and certainly the enjoyment comes across on disc. The 'how' of it isn't... — Gramophone Classical Music Guide, 2010 More…

By all accounts the performances at the Barbican were among the most enjoyable of their kind in London for a long time, and certainly the enjoyment comes across on disc. The 'how' of it isn't so easily defined. It isn't the applause and occasional chuckles, though they help (comedy abhors a vacuum). It isn't even that, despite this being a concert rather than a staged event, the cast are performing entirely in character, and that they're doing so with zest and humorous intelligence.
Rather it's as though a spirit of fun is in the air, breathed in by everyone, including the orchestra, who see the score's jokes and respond to its wit with the speed of light. Much of this must emanate from the maestro, who has every right to take pride in a brilliant achievement.
Michele Pertusi as Falstaff may lack Tito Gobbi's expressive resources, but he nevertheless has plenty of variety to offer. The grotesque acolytes and preposterous doctor play up well, and the lovers, Nannetta and Fenton, are a charming couple, convincingly young in voice and lyrical in style. Jane Henschel is a strong Mistress Quickly, better integrated into the ensemble than the riper plum-pudding dames who get the big laughs.
Falstaff has been well served on records ever since Toscanini set the standard high in 1950, but in few versions can the orchestra have played with more evident appreciation of the comedy on stage – it's almost as though the members of the LSO know the libretto by heart. This bids to become a firm favourite.