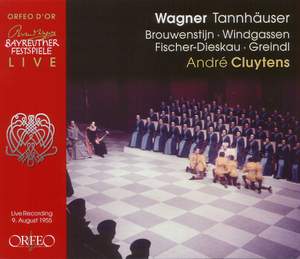 This is a revelatory interpretation of a work which isn't easy to bring off. André Cluytens had taken over the musical direction at Bayreuth from Eugen Jochum at short notice, and he seems energised... — Gramophone Classical Music Guide, 2010 More…

This is a revelatory interpretation of a work which isn't easy to bring off. André Cluytens had taken over the musical direction at Bayreuth from Eugen Jochum at short notice, and he seems energised by the challenge. Contemporary reviews spoke of the bright, shining strings and the luminous texture of the orchestra, and of the 'intoxicating magic' of the whole concept – all of which is confirmed by this first release. It comes from the second year of what is still considered one of Wieland Wagner's most elevating productions, and the photos in the booklet show us its moving simplicity and sense of dedication.
Director and conductor seem to have persuaded a fine cast to give of their very best.
Wolfgang Windgassen, who also takes the titlerole in Wolfgang Sawallisch's 1962 recording from Bayreuth, is here in fresher voice and is even more alternately elated and anguished in his delivery than seven years later. His paean to Venus in Act 1 is as heroically fervent as his narration in Act 3, telling of the Pope's rejection of his appeal for pardon, and expressing his own terrible torment of the spirit.
His true love, Elisabeth, is sung with total commitment and vibrant, outgoing voice by Gré Brouwenstijn. Her radiance in 'Dich teure Halle' and her reverence in her Act 3 Prayer could hardly be better done, equalling if not surpassing Anja Silja's rather different but just as valid approach in 1962. The young Fischer- Dieskau is a model Wolfram with a heart of gold and tone to match, each phrase benefiting from his eloquent approach. Josef Greindl, if you can excuse variable intonation, is an imposing Landgraf.
Herta Wilfert, a little-known mezzo, is competent but perhaps a little staid as Venus.
Wieland, as later in 1962, opts for the Paris version in Act 1, the Dresden in Act 2. The latter restores Walther's solo, a definite plus when it is sung with such beauty by Josef Traxel.
The choral singing is up to the superb standard of Wilhelm Pitz during his long reign as Bayreuth's chorus-master, and Cluytens draws playing of tremendous élan from what sounds like a vintage Bayreuth band. The mono sound is so good that you soon forget any limitations. This set enters the pantheon of great Bayreuth performances on disc.