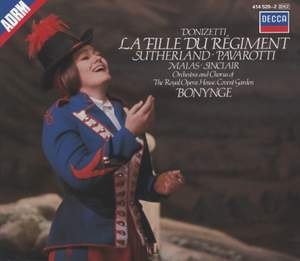 Even Joan Sutherland has rarely, if ever, made an opera recording so totally enjoyable and involving as this. With the same cast (including chorus and orchestra) as at Covent Garden, it was recorded... — Gramophone Classical Music Guide, 2010 More…

Even Joan Sutherland has rarely, if ever, made an opera recording so totally enjoyable and involving as this. With the same cast (including chorus and orchestra) as at Covent Garden, it was recorded immediately after a series of live performances in the Royal Opera House, and both the comedy and the pathos come over with an intensity born of communication with live audiences. That impression is the more vivid on this superb CD transfer. As with some of Decca's early CD transfers, you could do with more bands to separate items and it strikes one as odd not to indicate separately the most spectacular of Luciano Pavarotti's contributions, his brief but important solo in the finale to Act 1, which was the specific piece which prompted the much-advertised boast 'King of the High Cs'. For those who want to find it, it comes at 2'58" in band 13 of the first disc. Dazzling as the young Pavarotti's singing is, it's Sutherland's performance which, above all, gives glamour to the set, for here in the tomboy Marie she found a character through whom she could at once display her vocal brilliance, her ability to con- vey pathos and equally her sense of fun. The reunion of Marie with the men of her regiment and later with Tonio makes one of the most heartwarming operatic scenes on record.
The recording is one of Decca's most brilliant, not perhaps quite so clear on inner detail as some, but more atmospheric. Though there are one or two deliberately comic touches that approach the limit of vulgarity, the production is generally admirable. The sound at once takes one to the theatre, without any feeling of a cold, empty studio.

Sutherland is in turn brilliantly comic and pathetically affecting...Pavarotti is an engaging hero and his sequence of high Cs at the end of his aria, 'Pour mon ame', must count as among the most dashing ever recorded....a brilliant, happy opera set.