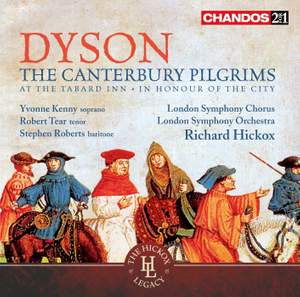 This superb offering of a full-length cantata based on the Prologue to Chaucer's Canterbury Tales bears out its reputation as Dyson's masterpiece. It's a fresh, tuneful work, aptly exuberant... — Gramophone Classical Music Guide, 2010 More…

Dyson: Overture: At the Tabard Inn

VI. The Clerk of Oxenford

VII. The Haberdasher and his Fraternity. The Merchant

VIII. The Sergeant of the Law. The Franklin

X. The Doctor of Physic

XI. The Wife of Bath

XII. The Poor Parson of a Town

Dyson: In Honour of the City

This re-release of The Canterbury Pilgrims forms part of the new Hickox Legacy commemorative series on Chandos Records, leading up to (and continuing beyond) the fifth anniversary, in Nov 2013, of the conductor's untimely death. The two-disc set is issued on the Chandos 241 label for the price of 1 CD.

The pioneering account of The Canterbury Pilgrims, a colourful but neglected work by Sir George Dyson, brilliantly depicts assorted characters from the prologues of Chaucer’s famous Canterbury Tales, while highlighting key aspects of Hickox’s recorded legacy: the championing of neglected repertoire in general, and British repertoire in particular, as well as his special affinity with choral music.

Dyson described The Canterbury Pilgrims as a work for ‘chorus, orchestra and three soloists’, placing the emphasis firmly on the chorus – appropriate, as the work gets much of its momentum and swagger from the dramatic and highly effective choral writing. In fact, the practical needs of the English choral movement lay at the very heart of this work. Dyson had been troubled by the fact that music of the past was exercising an increasing domination of the concert repertoire, and recognised that major English works such as Vaughan Williams’s A Sea Symphony and Delius’s A Mass of Life were beyond most choral societies. The music that sprang from these concerns was uncomplicated, vivacious, and tuneful, and not surprisingly it proved an instant success with many choral societies.

When first released, this recording was well received by BBC Music Magazine, which wrote: ‘Chaucer’s amusingly ironic depictions and Dyson’s memorable tunes and imaginative orchestration are a winning combination. If you like Gerontius, Vaughan Williams and Ireland, you’ll like Dyson. Go out and buy this disc *****’.

Gramophone echoed the sentiment, particularly commenting on the quality of the sound: ‘This is a very fine recording… Every layer in the texture is exceptionally well defined and integrated, which is no mean feat when such elaborate forces – soloists, choir, and orchestra – are involved’

This superb offering of a full-length cantata based on the Prologue to Chaucer's Canterbury Tales bears out its reputation as Dyson's masterpiece. It's a fresh, tuneful work, aptly exuberant in its celebration of Chaucer.
Following the scheme of Chaucer's Prologue, the 12 movements, plus Envoi, present a sequence of portraits, deftly varying the forces used, with the three soloists well contrasted in their characterisations and with the chorus acting as both narrator and commentator, providing an emotional focus for the whole work in two heightened sequences, the sixth and twelfth movements, moving and noble portraits of the two characters who aroused Dyson's deepest sympathy, the Clerk of Oxenford and the Poor Parson of a Town. If the idiom is undemanding, with occasional echoes of Vaughan Williams's A Sea Symphony and with passages reminiscent of Rachmaninov's The Bells, the cantata sustains its length well.
Outstanding among the soloists is Robert Tear who not only characterises brilliantly but sings with admirable fullness and warmth. The beautiful, fading close, when Tear as the Knight begins the first tale, moving slowly off-stage, is most atmospherically done. Yvonne Kenny and Stephen Roberts sing well too, but are less distinctive both in timbre and expression. The London Symphony Chorus sings with incandescent tone, superbly recorded, and the orchestra brings out the clarity and colourfulness of Dyson's instrumentation.

the glory of the piece is the choruses, which are splendidly sung here...The splendid Chandos recording is fully worthy of the vibrant music-making here.