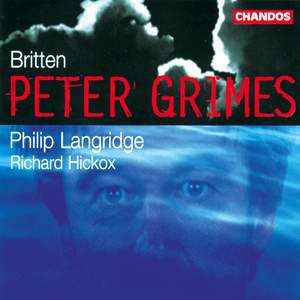 Any reading that so potently confirms the genius of this piece must have a distinguished place in the discography. In the first place there's Langridge's tense, sinewy, sensitive Grimes. Predictably... — Gramophone Classical Music Guide, 2010 More…

Prologue: The truth - the pity - and the truth (Peter, Ellen)

Act I Scene 1: Let her among you without fault (Ellen, Hobson, Mrs. Sedley, Ned)

Act I Scene 1: And do you prefer the storm (Balstrode, Peter)

Act I Scene 1: They listen to money (Peter, Balstrode)

Act I Scene 2: There's been a landslide up the coast (Fisherman, Boles, Balstrode, Auntie)

Act I Scene 2: No, I mean love (Boles, Balstrode, Chorus)

Act I Scene 2: Pub conversation should depend (Balstrode, Chorus)

Act I Scene 2: Have you heard the cliff is down (Ned, Auntie, Mrs. Sedley, Chorus)

Any reading that so potently confirms the genius of this piece must have a distinguished place in the discography. In the first place there's Langridge's tense, sinewy, sensitive Grimes. Predictably he rises to the challenge of the Mad Scene; this is a man hugely to be pitied, yet there's a touch of resignation, of finding some sort of peace at last, after all the agony of the soul. His portrayal is tense and immediate, and a match for that of Pears in personal identification – listen to the eager touch at 'We strained in the wind'. The next composite heroes are the members of the chorus. Electrifying as their rivals are, the LSO singers, trained by Stephen Westrop, seem just that much more arresting, not least in the hue-and-cry of Act 3, quite terrifying in its immediacy as recorded by Chandos.
Hickox's interpretation has little to fear from the distinguished competition. Many details are placed with special care, particularly in the Interludes and the parodistic dances in Act 3, and whole episodes, such as the Grimes- Balstrode dispute in Act 1, have seldom sounded so dramatic. Once or twice one would have liked a firmer forward movement, as in the fifth Interlude, but the sense of total music-theatre is present throughout.
Of the other soloists, the one comparative disappointment is Janice Watson's Ellen Orford. She sings the part with tone as lovely as any of her rivals on disc and with carefully wrought phrasing, but doesn't have the experience to stand out from the village regulars.
Britten's set remains hors concours, but that recording stretches over three CDs.
Hickox is the finest of the modern recordings: as sound it's quite spectacular, vast in range, with well-managed perspectives and just enough hints of stage action to be convincing.

The rhythmic spring which Hickox gives this colourful score harks back to the composer's classic set...The casting of Philip Langridge in the title-role is central to the set's success. As on stage, he is unrivalled at conveying the character's moutning hysteria, and the result is chilling. Janice Watson makes a most touching Ellen Orford