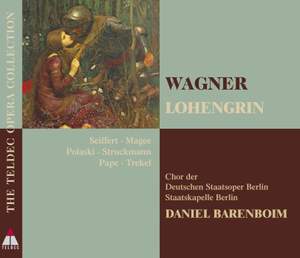 This recording is based on the cast with which Barenboim performed the opera at the Berlin State Opera in 1996, although the tenor taking the title-role is different. The chorus, so important... — Gramophone Classical Music Guide, 2010 More…

This recording is based on the cast with which Barenboim performed the opera at the Berlin State Opera in 1996, although the tenor taking the title-role is different. The chorus, so important in this work, sings with refinement, discipline and enthusiasm in its many roles while all departments of the orchestra play the score to the hilt. Barenboim himself manages to give an overriding unity to a work that can, in lesser hands, sprawl. That's particularly true as regards Act 2, which can test a listener's concentration; not here when the conductor so unerringly weaves the disparate elements into a coherent, forward-moving whole. He's also to be commended for playing Act 3 complete, restoring not only the theatre cuts often made in recording but also the second verse of Lohengrin's Grail narration, cut by Wagner before the first night. In the opera house it's sensibly omitted because it lengthens the act unduly. The only reservation concerns the famous Prelude to Act 3, which seems too brash and too fast. All the singers, with one exception, are regulars at the Berlin State Opera. The exception is Seiffert as Lohengrin, who in tone, phrasing and sheer lyrical ardour makes a near-ideal white knight.
His Elsa is Emily Magee, her tone full and refulgent, her interpretation deeply felt. The one worry is that her voice is so much like that of Polaski that they're hard to tell apart in their long confrontation in Act 2. Polaski makes a splendidly forceful and articulate Ortrud, only very occasionally sounding taxed by heavier passages, most worryingly in her closing imprecations.
Struckmann's Telramund isn't as tortured as Fischer-Dieskau's in Kempe's set, but these vital, involving interpretations have their own validity. Pape is a model King Henry, pouring out his concerns in golden tone. Trekel is a strong Herald. The set is enhanced by a perfectly balanced and warm recording.

Seiffert is a satisfying via media between a young Heldentenor and a flexible Italianate voice. Emily Magee, a dark, serious Elsa, is in fine vocal fettle; Deborah Polaski has something of the dark nobility of Varnay's Ortrud; the volatile Falk Struckmann is a playboyish Telramund. [Pape and Trekel] are superb.

The first glory of Barenboim's set is the sound, full and upfront, with the voices clearly focused and with plenty of bloom, set against a rich, incandescent orchestra...Barenboim's pacing adds warmth and urgency