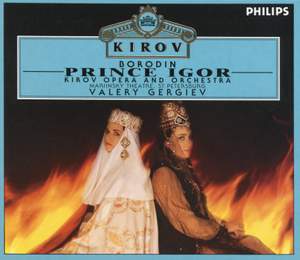 Prince Igor, even after 18 years of work, remained unfinished at Borodin's death in 1887, and it was finally completed by Rimsky-Korsakov and Glazunov.
Borodin's main problem with Prince Igor... — Gramophone Classical Music Guide, 2010 More…

No.3 Dance of the Polovtsian Maidens

Prince Igor, even after 18 years of work, remained unfinished at Borodin's death in 1887, and it was finally completed by Rimsky-Korsakov and Glazunov.
Borodin's main problem with Prince Igor was the daunting task of turning what was principally an undramatic subject into a convincing stage work. In many ways he never really succeeded in this and the end result comes over more as a series of epic scenes rather than a musical drama.
Despite this, however, the impression is given of a rounded whole, and it contains some of Borodin's most poignant and moving music, rich in oriental imagery and full of vitality. Curious things happen long before the official surprises of this vitally fresh Prince Igor, not least in the Overture, where Gergiev takes the horn's beautiful melody at a very slow pace. Gergiev is anxious to prepare us for the weighty events which follow and his particular point with the theme is to relate it to its place in the opera as the heart of Igor's great aria.
There, in league with the bass-baritonal timbre of Gergiev's prince, Mikhail Kit, it solemnly underlines the fact that this is an aria of potency frustrated, sung by a hero who spends most of the opera in captivity; and that's further emphasised by a second aria which no listener will ever have heard before. It's the most significant of the passages discovered among Borodin's papers, rejected by Rimsky-Korsakov in his otherwise sensitive tribute to Borodin's memory but specially orchestrated for this recording by Yuri Faliek.
The other problem with the Prince Igor we already know is the way that Act 3 rather weakly follows its much more imposing Polovtsian predecessor. Gergiev obviates both that, and the problem of too much time initially spent in Igor's home town of Putivl, by referring to a structural outline of Borodin's dating from 1883 which proposes alternating the Russian and Polovtsian acts. In the theatre, we might still want the famous Polovtsian divertissement as a centrepiece; but on the recording the new order works splendidly, not least because Gergiev is at his fluent best in the scenes of Galitzky's dissipation and Yaroslavna's despair, now making up the opera's Second Act. While Borodina executes Kontchakovna's seductive chromaticisms with astonishing breath control and focus of tone, Bulat Minjelkiev's Kontchak is a little too free and easy, at least next to Ognovenko's perfectly gauged Galitzky, a rogue who needs the extra rebellion music of the more recent version to show more threatening colours.
There's just the right degree of relaxation, too, about his drunken supporters Skula and Eroshka. It takes two Russian character-singers to make sense of this pair – 'with our wine and our cunning we will never die in Russia', they tell us truthfully – and their comical capitulation on Igor's return wins respect for Borodin's daring happy-end transition here.
It's beautifully paced by Pluzhnikov, Selezniev and their conductor, and crowned by a choral cry of joy which brings a marvellous rush of tearful adrenalin. That leaves us with Gorchakova, so touching in Yaroslavna's first aria but not always projecting the text very vividly and clearly not at her best in the big scena of the last act. Still, in terms of long-term vision, orchestral detail and strength of ensemble, Gergiev is ahead of the competition.