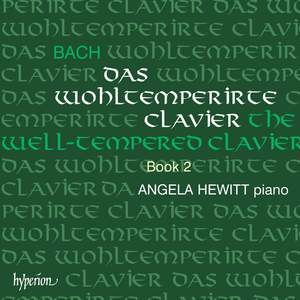 Admirers of Canadian pianist Angela Hewitt's lightly articulated and elegantly phrased Bach playing won't be disappointed by this recording.
These qualities characterise the playing of each and... — Gramophone Classical Music Guide, 2010 More…

This is the fifth release in Angela Hewitt's universally acclaimed series of Bach's keyboard music which is fast being seen as the definitive modern recording of this repertoire on the piano. Bach's Well-tempered Clavier ('The 48') consists of two books of 24 Preludes and Fugues in all the major and minor keys, and has been described as the pianist's 'Old Testament'. For over two hundred years these pieces have been the foundation of every pianist's repertoire.

Admirers of Canadian pianist Angela Hewitt's lightly articulated and elegantly phrased Bach playing won't be disappointed by this recording.
These qualities characterise the playing of each and every one of these profoundly didactic yet sublimely poetic pieces. Her restrained use of the sustaining pedal, her consequently clearly spoken articulation, and the resultant lucidity of musical thought, bring to mind the recorded performances of Edwin Fischer. Hewitt certainly sounds more comfortable in a studio than Fischer ever did, and her technique is more consistently disciplined than his was under these circumstances. Her reflective view of the more inward-looking fugues, such as the lyrical one in E flat minor, is most attractive. Taut, but with a suppleness that's entirely devoid of stiffness, this is indeed cogent and gracefully beautiful playing of a high order. You may sense, from time to time, an overtly intense element of subjective thought in her understanding of the music, a quality which seems to be endorsed by occasional references in her lively, illuminating and detailed introduction, to Bach's 'sense of inner peace', and so on. However, to conclude on a thoroughly positive and enthusiastic note, these are performances of Book 1 that you'll want to hear many times over. The recording and instrument sound well, too.
Hewitt's Book 2 is a delight to both ear and mind. Everything is in the best taste and free of exhibitionism. There are subtle tonal nuances, natural rises and falls of dynamics, well-defined differentiation of contrapuntal lines and appreciation of the expressive implications of Bach's chromaticisms. Throughout her playing of these preludes and fugues – several longer, more mature and more demanding than those of Book 1 – there's a sense of unhurried poise, with flowing rhythm. The air of tranquillity is underlined by her frequent adoption of very quiet openings, many of which then take on a warmer tone towards the end – even the E major Fugue, which Landowska labelled 'combative', is handled quietly, yet she's able to sound contemplative (as in the E major Fugue) without lapsing into Tureckian reverentiality.
Just occasionally Bach's more intense movements tempt her into emotional rubatos which, though musically affecting, take Bach out of his century, and not everyone will care for the big allargandos she makes at the ends of some of the earlier movements. Otherwise these are musicianly and imaginative performances.