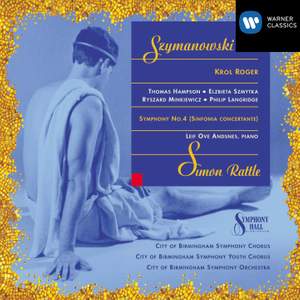 King Roger is a ravishingly beautiful opera, but a very fragile one. With a shrill soprano or a less than ideally cast tenor it would be fatally flawed. Minkiewicz's Dionysiac Shepherd betrays... — Gramophone Classical Music Guide, 2010 More…

King Roger is a ravishingly beautiful opera, but a very fragile one. With a shrill soprano or a less than ideally cast tenor it would be fatally flawed. Minkiewicz's Dionysiac Shepherd betrays a slight hardness and a touch of stress in full voice, but he has both the allure and the mystery that the role imperatively demands. Almost his first words are 'My God is as beautiful as I', and he should vocally suggest that he is indeed radiantly beautiful. His voice shades to a croon at times, but he never sounds epicene.
Szmytka is a wonderful Roxana, with beautifully pure high notes and bell-like coloratura.
At the end of Act 2 her florid aria is repeated (in Szymanowski's concert version), at just the point where you might well have replayed the earlier track for the pleasure of listening to her again. The use of distinguished singers in the smaller roles is no extravagance: Langridge evokes the exotic strangeness of the Arab sage Edrisi, while Rappé and Gierlach add to the hieratic gravity of the opening scene. Hampson in the central role is in fine voice, easily conveying Roger's authority, his angry but bewildered rejection of the Shepherd's new religion.
He's even finer, however, in Act 5, where the King is painfully torn between Dionysus and Apollo. The ambiguity of the final scene remains, as it must. Is Roger accepting the Shepherd in place of Roxana? Or, since Roxana herself immediately succumbs to the Shepherd's glamour, is Roger achieving wholeness by at last acknowledging feminine intuitions within himself? That these questions remain resonant and provoking at the end of the performance is a tribute both to the work itself, and also to Rattle's handling of it. The orchestral textures are voluptuously rich and subtly coloured, aided by a spacious recording (the vast Byzantine basilica of the opening scene is magnificently evoked) and orchestral playing of a very high order indeed. This is the finest recording of King Roger that has so far appeared.
The Fourth Symphony, in Szymanowski's later, folk-derived and harder-edged style, is a huge contrast: quite a shock after the opera's radiant conclusion. Andsnes's powerfully athletic playing points up the music's affinities with Prokofiev, and both he and Rattle emphasise the new vigour that Szymanowski was drawing from the fiddle music of the Tatra region.