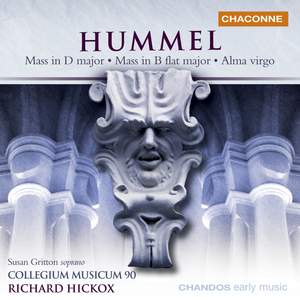 When the glories of Haydn's late Masses have been widely appreciated, it's sad that Hummel's have been so neglected.
They are for chorus and orchestra alone, without soloists, which may have... — Gramophone Classical Music Guide, 2010 More…

When the glories of Haydn's late Masses have been widely appreciated, it's sad that Hummel's have been so neglected.
They are for chorus and orchestra alone, without soloists, which may have deterred potential performers.
However, while they can't quite match late Haydn or Beethoven in originality, they're lively, beautifully written, and full of striking ideas, inspiring Hickox and his team to performances here just as electrifying as those they have given of Haydn, and just as vividly recorded.
Hummel follows Haydn in both Masses in his fondness for fugues. Similarly, he follows Haydn in offering joyfully energetic settings of 'Dona nobis pacem', only unlike Haydn he doesn't end either Mass on a fortissimo cadence, instead fading down the final phrases, maybe for liturgical reasons in the context of a church performance. Hummel, like Haydn and Beethoven before him, fully brings out the drama of the liturgy, though in both settings of 'Et resurrexit' he begins not with a sudden fortissimo but with a rising crescendo, as though a crowd of bystanders are gradually appreciating the wonder of it.
Another symbolic point is that the Mass in B flat, dating from 1810, the year before Hummel left the Esterházy court, includes a setting of the Credo with distinctive unison and octave passages for the chorus, as though to emphasise unity of belief. In both masses the settings of the Sanctus are surprisingly brief, even perfunctory, yet the musical ideas could not be more striking, with a gently flowing 6/8 setting in the D major work and a bold setting in the B flat Mass which crams into the shortest span surprisingly varied ideas.
Thanks to the imagination of Richard Hickox, we're finally able to discover the joys of Hummel's Masses. An extremely fine disc.