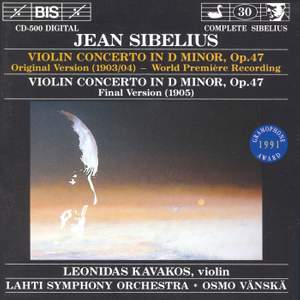 It's difficult to conceive of a masterpiece in any other form than it is. The impression the listener receives from Sibelius's Fifth Symphony – or The Rite ofSpring or La mer – must convey what... — Gramophone Classical Music Guide, 2010 More…

It's difficult to conceive of a masterpiece in any other form than it is. The impression the listener receives from Sibelius's Fifth Symphony – or The Rite ofSpring or La mer – must convey what Schoenberg called the illusion of spontaneous vision.
It's as if the artist had caught a glimpse of something that's been going on all the time, and has stretched out and effortlessly captured it. One of Sibelius's letters written to his friend Axel Carpelan in the autumn of 1914 puts it perfectly: 'God opens his door for a moment, and his orchestra is playing Sym 5'. But life isn't like that, and Sibelius worked for seven years (1912-19) before the Fifth Symphony reached its final form. He was nothing if not self-critical, and a number of his works underwent their birthpangs in public. The main theme came to him much earlier than 1903, and he recognised it for what it was, an inspired idea which remained unchanged. After its first performance in Helsinki in 1904 Sibelius decided to overhaul it. He realised the necessity to purify it, to remove unnecessary detail that impedes the realisation of a cogent structure.
In its finished form, it was given in Berlin with Karl Halir as soloist and Richard Strauss conducting.
Listening to Sibelius's first thoughts played with great virtuosity and excellent taste by Leonidas Kavakos and the superb Lahti orchestra is an absorbing experience. Although it's a great pity that many interesting details had to go, there's no doubt that the movement gains structural coherence. The fewest changes are in the slow movement, which remains at the same length. As in the case of the Fifth Symphony, where the revision is far more extensive than it is here, the finished work tells us a great deal about the quality of Sibelius's artistic judgement, which is what makes him such a great composer.
This disc offers an invaluable insight ino the workings of Sibelius's mind. Kavakos and the Lahti orchestra play splendidly throughout, and the familiar concerto which was struggling to get out of the 1903-4 version emerges equally safely in their hands. Invaluable.

both versions are played with outstanding bravura and intensity by Leonidas Kavakos, and if the proportion of essential Sibelius is rather lower in this collection than it is in some other boxes in the series, the level of performance is as high as ever.