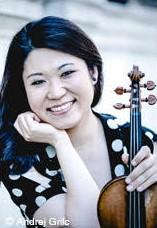 Winner of the prestigious ECHO Klassik Instrumentalist of the Year (Violin) 2015 for her Naxos recording Ysaÿe’s 6 Sonatas for Solo Violin, the Best Up-and-Coming Artist 2014 and the Annual Prize of the German Record Critics [Schallplattenkritik] in 2014 for her Naxos recordings of the Mendelssohn Violin Concertos and Complete Music for Violin by Sarasate, Tianwa Yang is referred to as ‘an unquestioned master of the violin’ by American Record Guide who ‘rises above her competition’ (Fanfare). The young violinist, a resident of Germany and heralded by the Detroit News as ‘the most important violinist to come on the scene in many a year,’ performs with such major orchestras as the Detroit, Seattle, Baltimore, Nashville, Sydney, Kansas City, Virginia, Pacific, Vancouver, Toledo, SWR-Baden Baden-Freiburg, WDR Cologne, MDR-Leipzig, HR Radio Frankfurt, Malmö, Singapore and New Zealand Symphonies; the London, Dresden, Helsinki, Hong Kong, Malaysia, Buffalo, BBC, Deutsche Radio, Erfurt, Warsaw and Royal Liverpool Philharmonics; the Guerzenish Orchester-Cologne, Bayerisches Staatsorchester, Orchestre National d’Île de France, Orchestre Philharmonique de Strasbourg and the Macau Orchestra.