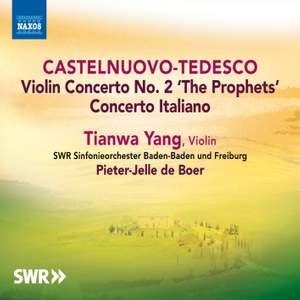 The Concerto italiano is not the breezy, pseudo-Victorian piece that its title might suggest; indeed, it is rather a melancholic work...[I profeti is] a rather more lively and colourful work...Its... — Gramophone Magazine, April 2015 More…

Mario Castelnuovo-Tedesco considered the 1924 Concerto Italiano to be his first truly symphonic venture. This tuneful, fresh and transparently scored concerto here receives its world première recording. It was admired by the great violinist Jascha Heifetz, for whom the composer wrote his Concerto No. 2 ‘I Profeti’ (The Prophets), an impassioned work ‘of biblical character and inspiration’ with an almost cinematic sweep. The recipient of the coveted Echo Klassik award for her album of Mendelssohn’s two Violin Concertos [8572662], Tianwa Yang is widely recognised as one of the outstanding rising stars on the world classical music scene.

Jose Miguel Cueto has recorded the Concerto No.2, coupled with violin works by Guastavino and Respighi on Marquis 81407, released in 2009. The most famous recording – of very few ever made – is by Jascha Heifetz on RCA, reissued on a miscellaneous disc containing works by Karen Khachaturian, Howard Ferguson, and Jean Françaix. It can also be found in the vast Heifetz Edition (RCA box set), and coupled with Walton’s Concerto on Naxos Historical 8111367. In this new recording it’s played by much-admired young violinist Tianwa Yang whose record of Vivaldi’s Four Seasons on Naxos was admired and whose series of four single discs of Sarasate’s works for violin and orchestra on Naxos has earned great international acclaim.

The Concerto italiano is not the breezy, pseudo-Victorian piece that its title might suggest; indeed, it is rather a melancholic work...[I profeti is] a rather more lively and colourful work...Its glittering, singing lines certainly bring a resonant response both from soloist Tianwa Yang and the SWR Symphony Orchestra.

Tianwa Yang confirms her growing reputation with playing of great prowess, though her performance of I Profeti is altogether more ebullient than Heifetz’s own introverted account. There are stylish contributions, too, from the Baden-Baden and Freiburg Radio Orchestra under Pieter-Jelle de Boer.

This world premiere recording of Mario Castelnuovo-Tedesco’s early Concerto Italiano...reveals the early 20th-century Italian to be a lush, lyrical and fluent composer. No wonder he later flourished in Hollywood.