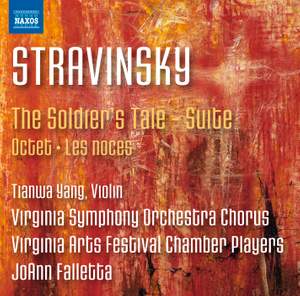 This is a clear and enlighting performance. — BBC Music Magazine, December 2016, 3 out of 5 stars

I. The Soldier's March

II. Airs by a Stream

VII. Dance of the Devil

IX. Triumphant March of the Devil

Scene 1: The Tresses: At the Bride's House (Bride, Bridesmaids, Mother)

Scene 3: The Departure of the Bride (Chorus, Bride, Parents)

The three works on this recording were composed at a crucial juncture in Stravinsky’s musical life. The Soldier’s Tale, a small-scale theatrical work for instrumental septet, narrator and two speakers completed in 1918 (Naxos 8573537). It is performed here in the Suite premièred in 1920. The Octet marked a new element in Stravinsky’s writing, inaugurating a turn to neoclassicism, whilst Les Noces (The Wedding) is a ballet cantata impelled by dramatic motor rhythms, and once again saturated in his Russian background. Scored for pitched and unpitched percussion, vocal soloists, and mixed chorus, it is a pivotal work in Stravinsky’ s development.

JoAnn Falletta serves as Music Director of the Buffalo Philharmonic and Virginia Symphony and is the Principal Guest Conductor of the Brevard Music Center of North Carolina. She has guest conducted over a hundred orchestras in North America, and many of the most prominent orchestras in Europe, Asia, South America and Africa. A champion of American music, she has presented over five hundred works by American composers including 110 world premières. Her Naxos recordings include the double Grammy Award-winning disc of works by John Corigliano and Grammy nominated discs of works by Tyberg, Dohnányi, Fuchs, Schubert, Respighi, Gershwin, Hailstork and Holst.

This is a clear and enlighting performance.