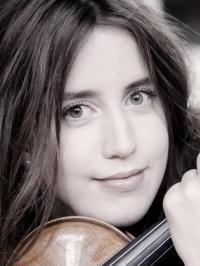 The Norwegian violinist Vilde Frang was born in Oslo and began Suzuki violin lessons aged four before training at Oslo’s Barratt Due Institute of Music (where her teachers included Henning Kraggerud) and in Hamburg; she was mentored by Anne-Sophie Mutter from the age of twelve, and early successes included a Borletti-Buitoni Trust fellowship, followed by a Credit Suisse Young Artist Award, and the newcomer prize at both the Classic Brits and the Echo Klassik Awards in 2011 (she would go on to win prizes at the latter in 2013, 2015 and 2016 for her recordings of concertos by Nielsen & Tchaikovsky Concertos, Mozart, and Britten & Korngold - all on Warner Classics, with whom she signed in 2008). Other awards include a Diapason d’Or in 2018 for her recording of Bartók’s First Violin Concerto and the Enescu Octet, and a Gramophone Award for her Britten/Korngold Concertos in 2016.