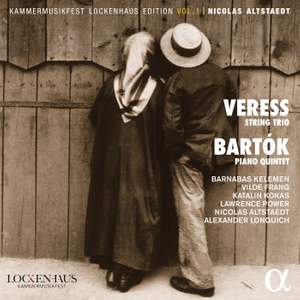 For me, Veress’s trio is the heart of this disc. There have been four previous recordings, none of which I’ve heard, but I can’t imagine a more inspired performance; these three play as if they... — Fanfare, March/April 2020 More…

The Lockenhaus International Chamber Music Festival is regarded as one of Austria’s most prestigious festivals: it was created by the violinist Gidon Kremer to offer a new vision of chamber music and the opportunity to create musical exchanges in an intimate setting. The cellist Nicolas Altstaedt succeeded Gidon Kremer in 2012 and now continues the spirit of the festival. For this first recording in partnership with Lockenhaus, he is joined by experienced partners, including the Norwegian violinist Vilde Frang, the Hungarian violinist Barnabás Kelemen, the German pianist Alexander Lonquich – whose Schubert double album was recently released on Alpha (Alpha 433) – and the British violist Lawrence Power. Together they have selected two works, the Piano Quintet of Béla Bartók, a demanding composition, rarely performed even though it is considered an intensely personal work, and the String Trio of Sándor Veress, a former student of Bartók. Nicolas Altstaedt has joined Alpha for several recording projects that will illustrate the full range of his talents, in a highly eclectic range of music.

For me, Veress’s trio is the heart of this disc. There have been four previous recordings, none of which I’ve heard, but I can’t imagine a more inspired performance; these three play as if they love the piece and have known it for some time.

Bartók’s Piano Quintet summons Brahms and Strauss as obviously influences…I think it fair to say that Kelemen, Frang, Katalin Kokas, Altstaedt and Alexander Lonquich sell this lovable product of youthful creative excess more securely than any oft heir predecessors on disc…But what makes this CD unmissable is the Veress Trio, a masterpiece and a performance to match. I’ve already pencilled it in as a contender for next year’s Gramophone Awards.

Two real rarities here, and both are terrific: Veress’s 1954 String Trio encompasses Shostakovichesque bleakness, jazz and extended techniques such as knocking and slapping the bodies of the instruments (deployed to hair-raising effect in the moto perpetuo second movement), after which the lush, nigh-on symphonic expansiveness of Bartók’s early Piano Quintet (1897) quite takes the breath away with its whispers of Brahms and even Elgar.