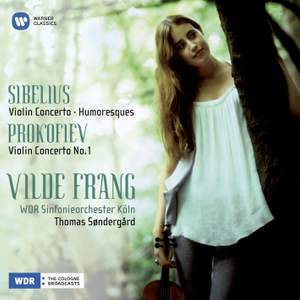 Frang heralds one of the freshest and most vital accounts of this familiar and frequently recorded work [the Sibelius concerto] in recent years. On display from the off is a vivid sense of intellectual... — Michael Quinn, bbc.co.uk, 16th February 2010 More…

EMI Classics is pleased to announce the signing of Norwegian violinist Vilde Frang. Her first recording features the Sibelius Violin Concerto and three Humoresques and Prokofiev’s Violin Concerto No. 1, recorded live with the WDR Sinfonieorchester Köln and conductor Thomas Søndergård. Vilde’s debut recording for EMI Classics is a WDR co-production with support from the Borletti-Buitoni Trust.

Stephen Johns, Vice President of A&R, EMI Classics, said, “Vilde Frang is a brilliant young violinist and a protégée of Anne Sophie Mutter. It was Vilde’s performance of the Sibelius Violin Concerto that first caught our attention. Her special and unique voice, coupled with playing of great fervour and depth, promises a brilliant debut disc.”

Born in Norway in 1986, Vilde Frang began her studies at Oslo’s Barratt-Due Institute of Music and subsequently worked with Kolja Blacher at the Hamburg Musikhochschule. She currently participates in the Kronberg Academy Further Master Studies programme as a student of Ana Chumachenco and holds a scholarship at the Anne-Sophie Mutter Foundation.

After making her debut at the age of ten with the Norwegian Radio Orchestra, Vilde was engaged by Mariss Jansons to perform with the Oslo Philharmonic. Since then, she has been a soloist with orchestras in Scandinavia, England, Germany, Austria, Switzerland, the Baltic countries, the U.S., Singapore and Taiwan.

Vilde Frang made her debut with the London Philharmonic Orchestra in 2007 and was immediately re-invited for a concert at the Royal Festival Hall in May 2009, when she performed works by Vaughan Williams and Ravel. Classicalsource.com wrote, “Vilde Frang gave [an] ego-free interpretation of Vaughan Williams’s The Lark Ascending; the misty sounds she magically conjured added to the mystery of the music; this was playing of fluidity and lightness to create the sensation of a bird in flight. Frang hypnotised the audience and then changed mood and tone for Ravel’s Tzigane, an acidic, rugged and black-humoured display.”

Vilde has participated in music festivals including Verbier, Schleswig Holstein, Mecklenburg Vorpommern and the Bel Air Festival in Chambéry, where she played chamber music with Martha Argerich and the brothers Renaud and Gautier Capuçon. Vilde has also collaborated with Gidon Kremer, Yuri Bashmet and Maxim Vengerov. In 2008 she toured Scandinavia, and in 2009 the United States, with Anne-Sophie Mutter and Camerata Salzburg in the Bach Double Concerto, performing at such prestigious venues as Chicago’s Orchestra Hall, Washington, D.C.’s Kennedy Center and New York’s Carnegie Hall.

In November 2008, Vilde performed the Brahms Violin Concerto as guest soloist with the Royal Swedish Ballet Orchestra and conductor Rossen Milanova as part of the ballet, Rättika, by Mats Ek. “From the orchestra pit violinist Vilde Frang gives Brahms Violin Concerto body, dance and poetry. With Frang in their blood the dancers are so musical one wants to cry.” (Expressen) Vilde reprises her Brahms Concerto performances with the Royal Swedish Ballet in September 2009.

Other upcoming engagements include a Wigmore Hall recital (July 2009), Cheltenham Festival with the Hallé Orchestra and Edward Gardner (July 2009), Bad Kissingen and Rheingau festivals (July 2009), a performance of Prokofiev No 1 in Zurich as part of the Orpheum Foundation series with the Tchaikovsky Symphony Orchestra and Vladimir Fedoseyev (August 2009), Lucerne Festival (September 2009), BBC Philharmonic and Sinaisky (October), NDR Hanover, and Frankfurt Museumorchester (February 2010).

Vilde Frang has won a number of major prizes, among them the Grand Prize of the 2007 Vera and Oscar Ritter Stiftung, a Fellowship from the Borletti-Buitoni Trust in 2007 and the 2009 Norwegian Soloist Prize. She plays a Jean Baptiste Vuillaume violin, on loan from the Anne-Sophie Mutter Freundeskreis Stiftung, which has supported Vilde Frang since 2003.

Frang heralds one of the freshest and most vital accounts of this familiar and frequently recorded work [the Sibelius concerto] in recent years. On display from the off is a vivid sense of intellectual drive and emotional sinew in playing that taps into Scandinavian melancholy and suppressed passion to genuinely engaging effect.

Frang makes a considerable impact. It's clear that the Sibelius concerto means a lot to her; she's constantly searching for the tonal quality and manner of playing that will project most strongly her vision of the music...And her technique is secure enough to surmount all Sibelius's virtuoso hurdles.

The Norwegian violinist launches this impressive debut recording with a commanding interpretation of the Sibelius concerto. The slow movement’s sweetly emotional, and she marries the finale’s mix of sinew and twinkle with unusual conviction — it must be her Scandinavian blood.