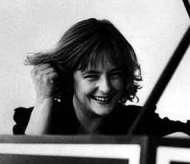 Sophie Yates began her career by winning the international Erwin Bodky Competition at the Boston Early Music Festival, and as a result she was invited to tour and broadcast throughout the eastern states of America. She now performs regularly around Europe, the United States and Japan, and has also worked in Syria, Morocco and Western Australia. Known for her affinity with the French baroque, the music of the Iberian Peninsula and English virginals music, she has performed on most of the playable virginals surviving in Britain and is working on a long-term project to collect a book of contemporary English pieces for this instrument.