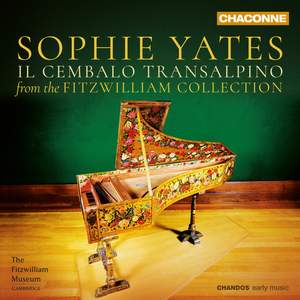 Her playing is a delight, demonstrating great understanding of both music and instrument. Works from the Fitzwilliam Virginal Book occupy the larger part of the programme, with the Passamezzo... — Choir & Organ, December 2019, 5 out of 5 stars More…

All the music in this programme comes from the Fitzwilliam Museum, Cambridge, and most of it was collected by its founder, Richard, Seventh Viscount Fitzwilliam of Merrion. A polymath, lover of music, amateur composer and harpsichordist, musically active from about 1760 until his death, Fitzwilliam created a legacy of exceptional importance to English musical culture. The recording features the Boni harpsichord from the Fitzwilliam Collection, was originally made by Giovanni Battista Boni who worked in Cortona in Tuscany. In some ways it is conventional for its time, having a slab sawn cypress soundboard and light cypress case, but its original set-up was a highly unusual one, with three sets of strings at the same 8 ft pitch. During a previous restoration, by Trevor Beckerleg in 1975, the third register, which had been out of use, was re-instated and this gives the player more resources than does the usual Italian harpsichord: both the front and back rows of jacks pluck the same set of strings but in different places, which gives them a distinctly different timbre, and the various combinations of the three registers provide the player with five distinct sounds to choose from.

Her playing is a delight, demonstrating great understanding of both music and instrument. Works from the Fitzwilliam Virginal Book occupy the larger part of the programme, with the Passamezzo Pavan and Galliard by Peter Philips particularly impressive. Other works from the collection include the Toccata settima of Frescobaldi, which receives one of the finest performances I have heard, and three sonatas from an Amsterdam collection of 1705 bought by Fitzwilliam in 1771.

Read carefully. This is not a disc of music from the Fitzwilliam Virginal Book…The Fitzwilliam connection is clinched by Yates’s use of the Museum’s early 17th-century Tuscan harpsichord by Boni, a crisp, full-throated and deep-coloured beauty. Her playing is strong-fingered, buoyant and well-paced…this is an unusual and well-conceived programme, appealingly performed.

A fascinating insight into the more neglected recesses of the Fitzwilliam Collection.