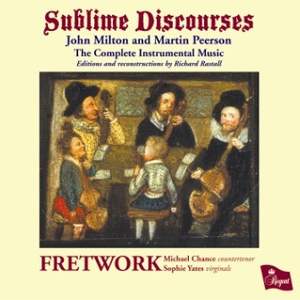 The Complete Instrumental Music of John Milton and Martin Peerson

Fretwork here unveils some obscure but engaging works from the golden age of English consort...Fretwork responds with playing that ranges from buoyant and capricious to episodes of high seriousness.... — BBC Music Magazine, March 2012, 5 out of 5 stars More…

In Nomine, If That A Sinner's Sighs

The Fall Of The Leafe

With additional contributions from Michael Chance and Sophie Yates.

Includes all the works for viol consort, all the solo keyboard works and the single song with viol consort accompaniment.

A significant and invaluable contribution to the discography of 17th century English music in incomparable performances from some of the world’s finest artists in this field.

Sadly this was one of the final recordings that Richard Campbell made with Fretwork before his death in March 2011.

Fretwork here unveils some obscure but engaging works from the golden age of English consort...Fretwork responds with playing that ranges from buoyant and capricious to episodes of high seriousness. Throughout, we hear the flawless technique and luminous sound that have helped to establish Fretwork's reputation as one of today's leading viol consorts.

This apt album title never seems far away during these exquisitely conceived performances of 20 consort pieces in five or six parts. Fretwork play with gentle mastery of affect...Sophie Yates exercises her beguiling touch in four keyboard pieces by Peerson...The generation of composers active in the years prior to the English Civil War is somewhat forgotten, so this harmonious match of Rastall's scholarly research and Fretwork's fine musicianship is priceless.