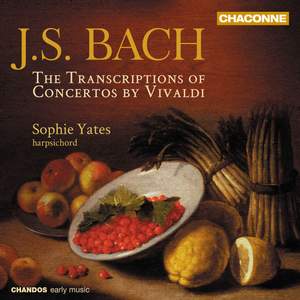 JS Bach: The Transcriptions of Concertos by Vivaldi

This recording brings together all the arrangements for harpsichord by Bach of instrumental concertos by his Italian contemporary Antonio Vivaldi, adding those of one concerto each by the brothers Alessandro and Benedetto Marcello. They are performed by Sophie Yates who has made a series of solo CDs for Chandos, many of which have won international awards. She has been described by Gramophone as ‘hugely talented’ and by BBC Music as playing ‘with exceptional poise’.

The concertos by Vivaldi are taken from three different sets: L’estro armonico, Op. 3, La stravaganza, Op. 4, and the set of twelve Concerti a cinque, Op. 7. These are all works which Vivaldi composed early in his career, when he was still making his reputation. For these concertos, Vivaldi chose a Dutch publisher, which crucially allowed the concertos to become available in Northern Europe. This in turn helped to increase the popularity of the concertos, not to mention the influence of Vivaldi’s style. In the words of The New Grove dictionary, L’estro armonico was ‘the most influential music publication of the first half of the eighteenth century’.

So why did Bach choose to tackle the difficult problem of conveying the quintessential Venetian violin sound on a keyboard instrument? One explanation could be that Bach transcribed these concertos for his own education, later adopting the new ideas in works such as the Concerto in the Italian Style for harpsichord. Or perhaps Bach simply enjoyed these works so much that he wanted to experiment with them. Yet another explanation is provided by the German musicologist Arnold Schering, who wrote: ‘we shall have to seek the purpose of these arrangements in practical music-making and be able to accept that within a short time the new concerto of the Italians became such a favourite that players wanted to be able to play the particularly popular concertos with their own two hands on clavichord or organ. Bach’s arrangements would then be considered to be what they really are: keyboard extractions, “for the soul’s refreshment of music-lovers”.’

Yates gives a lively, fluent account of these showy pieces, always keeping in mind the importance of textural transparency.

[Yates's playing] is decisive and sensitive. She responds as much to the music’s inherent grandiloquence as to its measured lyric repose in slow movements...[the harpsichord] sounds really marvellous and lacks for nothing in subtlety.