With the notable exception of an acclaimed Prokofiev recital with pianist Steven Osborne a few years ago, Alina Ibragimova has recorded surprisingly little Russian repertoire to date, so her upcoming album of the two Shostakovich concertos with Vladimir Jurowski and the State Academic Symphony Orchestra of Russia 'Evgeny Svetlanov' on Hyperion (due out next Friday) is an enticing prospect indeed. We spoke earlier this month about the films, books and musicians which have informed her perspective on the composer, the physical and emotional challenges presented by the concertos, and her upcoming socially-distanced recording project...

This is your first recording of Shostakovich – how long have the concertos been in your repertoire?

I started learning No. 1 at school, when I was 15 or 16; I was studying with a Russian teacher then, and she really took time to tell me about all the background and history and made sure I got to know influential films and books of the same period. And then the Second Concerto has been more recent – I learnt that a few years ago. I’ve always loved playing both pieces, and I’ve always felt very close to Shostakovich’s music more generally: I’ve performed the string quartets and trios a lot, but unfortunately they’re a little too late for my quartet Chiaroscuro. We play on gut strings, so our focus is mainly on Classical and early Romantic repertoire.

Which particular books and films influenced your perspective on this music?

Aleksandr Solzhenitsyn was my starting-point, then a little later I remember reading Doctor Zhivago and that really resonated with me: although it’s very different from Shostakovich’s music on many levels, there was something intangible there that spoke to me in the same kind of way. The films of Sergei Eisenstein, too, give such a vivid impression of how really difficult times influenced the Russian people on so many levels. It’s a very particular culture and the reaction to historical events is also particular - the depth with which people experience them and the generosity that they still manage to retain through times of such turbulence and suffering. The sense of hope and the need for something beautiful is always so present, and that’s not only true of the twentieth century: it’s something that runs through all periods of Russian history. Dostoyevsky’s novels, for instance, are also so preoccupied with that idea of generosity shining through darkness.

Was it important for you to record this music with a Russian orchestra and conductor?

Not specifically: I asked Vladimir Jurowski to do this project with me, and the idea came from him. The first recording we made together was the Mendelssohn concerto in 2010/11; we’ve been doing concerts here and there since then, and this time he suggested we record in Moscow with his orchestra. But it was a really special experience for me because the Russian orchestras have such a particular sound, which is also a sound that I remember from my childhood in Moscow. We recorded the Second Concerto in February of last year, mainly as a live recording from a concert; the First Concerto is a studio recording from July.

Which particular musicians – not necessarily violinists – have really inspired you in Shostakovich?

David Oistrakh in the concertos, of course, and more generally Yevgeny Mravinsky and the Borodin Quartet. When I was growing up I heard Gidon Kremer play a lot, and that was always very inspiring for me.

Given that Shostakovich wasn’t himself a violinist, how grateful is his writing here from a technical point of view? Do you sense Oistrakh’s guiding hand at work?

I think Oistrakh helped Shostakovich a great deal when it came to writing for the violin – there’s even a little recording of a phone-call between Oistrakh and Shostakovich about the Second Concerto, which is really interesting. Both concertos are very well-written in terms of how the music fits under the fingers, but what I find the most challenging is just the sheer stamina which these pieces require: the First Concerto (particularly the cadenza and then the last movement) can be absolutely exhausting if you put in as much emotional and physical power as you want to. That was the most difficult aspect of the piece for me, especially when I was first learning it as a skinny teenage girl! You have to figure out how to pace yourself, and that’s something which you can only do through experience of playing it and acquiring the necessary stamina.

Oh, yes: the emotional message of the First Concerto is very powerful and direct, whereas the Second is a little more internalised…it’s still very strong, particularly the cadenza in the last movement, but there is a certain ambiguity about it all that I don’t sense in the First Concerto.

How is lockdown working out for you in terms of making music?

I’m actually back in the studio next week to record the Paganini Caprices: that’s been my project for the last couple of months, so I’ve been practising a lot! I’d deliberately scheduled a lot of time off over the past few months and I was just getting ready to go again when lockdown was announced: I had a very busy period planned for the whole summer, and of course that’s all gone. But I thought I would just keep playing regardless – I don’t want to spend this time doing something else. In a way Paganini is not the kind of repertoire I usually play, and the nice thing about that is that it doesn’t really remind me of doing live concerts or of the projects I had in the diary!

You really have to work hard at these pieces, and they demand your complete concentration: it’s proper training music, designed as a full technical workout, and there are no shortcuts! I started just practising them for my own pleasure, and then I thought ‘What if we recorded them now?’. And it all came together very quickly: everyone seems to be really eager to try out new ways of communicating music now, so people were extremely quick to adapt. And of course it’s perfect repertoire for a socially-distanced recording: we can do it very easily with everyone in separate rooms.

Is there other Russian repertoire on your radar – either concertos or violin and piano repertoire?

I really want to try and play some Weinberg at some point, because I find he’s a very interesting figure. And I’d like to come back to Tchaikovsky, too, especially some of the chamber music; I think the Tchaikovsky quartets could work very nicely on gut strings, so perhaps that might be something to explore with Chiaroscuro. And maybe some more Prokofiev as well – I recorded the violin and piano music a few years ago with Steven Osborne, and it would be very nice to have a go at the concertos… 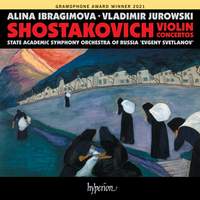 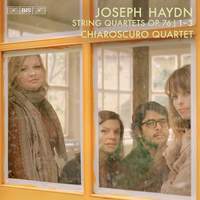 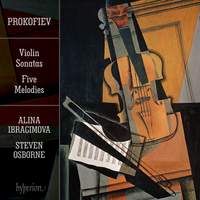 'Two of today’s most impressive soloists unite in pieces both introspective and lyrical, and – particularly the First Sonata – deeply emotional. Musical collaboration at its most intense and thoughtful.' (Gramophone)