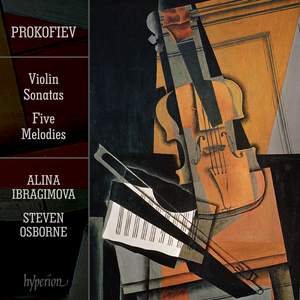 From the austere opening bars...it's clear that this violin-and-piano duo is capable of the subtlest interplay. Steven Osborne is the lion, or the demon, that needs taming by Alina Ibragimova's... — BBC Music Magazine, August 2014, 5 out of 5 stars More…

Recording of the Week,  Prokofiev Violin Sonatas from Alina Ibragimova and Steven Osborne

‘One of the biggest joys of the London concert scene in recent years has been the opening up of the musical world of Alina Ibragimova, a world that seems to know no bounds … here she was partnered by Steven Osborne—a meeting of minds and talents that had that paradoxical effect, common to the best collaborations, of two strongly contrasted individuals speaking with one voice. The First Sonata really let fly … quiet but powerfully sustained in the slow music, a fount of uncorked energy in the more frequent fast sections, Ibragimova dug deep into Prokofiev’s aching heart, profiling the jagged motifs of the Allegro brusco second movement as vividly as she tore into the syncopated rhythms of the battling finale—every phrase stamped with conviction and gravitas’ (Financial Times)

Hyperion is delighted to present a collaboration—an extraordinary force on the concert platform—in its first appearance on record. Alina Ibragimova and Steven Osborne are musicians of searing, uncompromising intelligence and intense feeling.

In his works for the violin, Prokofiev produced some of his most personal and expressive music. Both of his Violin Sonatas were written for David Oistrakh. The First was begun against the backdrop of Stalin’s Great Terror, in 1938, and one senses that he drew his inspiration from the uncharacteristically dark wells of fear, despair and bereavement which were the lot of Prokofiev and his contemporaries. The Violin Sonata No 2 in D major is of a very different character—generally sunny and carefree, though still with occasional fleeting shadows from the dark world of the First Sonata. In its original form it was a Flute Sonata, Op 94, which Prokofiev had completed in 1943. At David Oistrakh’s suggestion and with his assistance, Prokofiev transcribed this Sonata to create the Second Violin Sonata, Op 94bis.

From the austere opening bars...it's clear that this violin-and-piano duo is capable of the subtlest interplay. Steven Osborne is the lion, or the demon, that needs taming by Alina Ibragimova's fiddler, dancing - sometimes ever so frailly - on the volcano.

they bring their interpretation to disc – with the same conviction, clairvoyance and charismatic force as their live rendition. Osborne’s weighty tone is a match for the Russian-born violinist’s no-holds-barred attack.

Two of today’s most impressive soloists unite in pieces both introspective and lyrical, and – particularly the First Sonata – deeply emotional. Musical collaboration at its most intense and thoughtful.

two enormously contrasting sonatas that could hardly be more different, but it's testament to the musicianship of Ibragimova and Osborne that both works, as well as the Melodies (which are certainly more than just filler material), succeed so well.

They are played here with an intense-feeling virtuosity, Ibragimova equally magnificent in restraint...and when belting out, say, the second movement of [the F minor], as strongly contrasted with its predecessor as the whole sonata is with its successor.

there is always room for performances of the depth of perception and strength of character that Ibragimova and Osborne give...In tandem with the comparative calm of the Second Sonata there is also a vitalising impetus and an apt palette of colour that distinguishes the whole disc.

The performances might lack the volcanic lustre found in Ibragimova’s Szymanowski album, but her febrile manner still finds a lively outlet in repertoire stamped with the skittish, the sardonic, the bittersweet and other Prokofiev hallmarks.

These Hyperion stablemates, recording together for the first time, appear on paper a dream team. And so they turn out to be: the earlier sonata astonishing for their unanimity of almost psychotic attack when called for.