Recording of the Week,  Little Britten

Well, the Britten centenary is upon us, as the new 50p coin and a quick survey of today’s new releases will testify...Virgin’s powerful new Rape of Lucretia, which I mentioned before Christmas, is among them - but today I want to tell you about an intriguing solo instrumental disc and a comprehensive collection of choral music which have been occupying me over the past week. 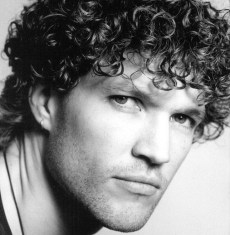 First up is Matthew Barley’s ‘Around Britten’, an eclectic but cohesive programme built around Britten’s mighty Third Cello Suite: written towards the end of Britten’s life for his great friend Rostropovich and inspired by his interpretation of the great Bach suites. The work utilises the ‘Kontakion’ (a Russian Orthodox hymn for the dead) and this chant also underpins several of the works by other composers on the disc. The significance of the recital’s title is two-fold: on one level, the programme is centred ‘around Britten’, with Gavin Bryars and John Tavener (and, in a haunting ten-minute improvisation, Barley himself) drawing inspiration from his writing for solo cello much as Britten himself did from Bach.

On another, it references Barley’s forthcoming journey ‘around Britain’: he’s just embarked on a 100-date tour which will see him performing the programme in a range of remote and unconventional venues including a cave and a lighthouse! (Do watch the short video-trailer if you’ve a spare five minutes - I saw it before sampling the disc, and found that just imagining hearing the music in some of these locations enriched my listening no end!)

The disc was recorded late at night in Canterbury Cathedral, where Barley’s grandfather was once Dean: he writes touchingly of his empathy with the building, and of his almost uncanny recent discovery that his grandfather had requested that the Kontakion be used at his funeral in the cathedral! If a disc based on a funeral chant sounds rather elegiac, well - I suppose it is, rather, but it’s suffused with a rapt, meditative quality that makes for wonderful late-night listening and there’s a splendidly boisterous arrangement of ‘Oliver Cromwell’ to round things off! (The disc includes several of Barley’s arrangements of Britten’s best-known folk-song settings, multi-tracked by the cellist in his home studio). I’ll be doing my best to catch Barley in one of the live performances, and urge any UK readers to do the same! 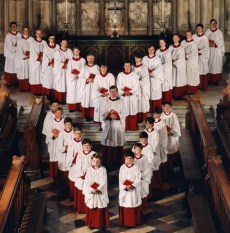 I’ve also been exploring Britten's sacred choral music, courtesy of Edward Higginbottom and New College Oxford. Though Britten’s career never centred around church music, his sacred choral output spans three decades (1930-1962) and fills two discs. There are fresh, incisive accounts of the oft-recorded Ceremony of Carols and Rejoice in the Lamb here, plus some shorter pieces which weren’t published or performed during the composer’s lifetime: try the 1961 Venite exultemus, only discovered several years after Britten’s death and not otherwise available on disc.

Comparisons are of course odious, but I found it fascinating to hear the New College boys in this repertoire shortly after listening in on a rehearsal of Britten at King’s Cambridge: whereas the King’s trebles sound rounded and impeccably polished, their counterparts at New have a vital, pleasingly rough-round-the-edges quality that put me very much in mind of the sound which Britten conjured from the children’s choirs on his own recordings. And whilst it sounds like a back-handed compliment to recommend a disc for its documentation, I must mention that Prof. Higginbottom and New College alumnus James Bowman discuss Britten’s conflicted relationship with Anglican liturgy with real insight and affection in booklet-essays that truly enhanced my appreciation of the music. 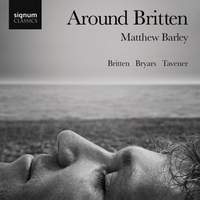 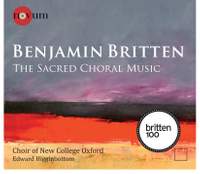