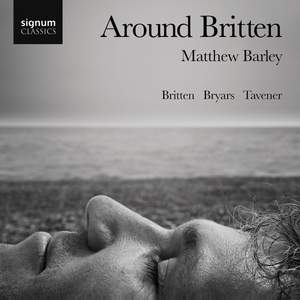 His performance of the Britten lets the light in on what can seem a rather obscure, labyrinthine work: Barley's clear, calm approach lays out the score before us...The rest of the disc is like... — BBC Music Magazine, May 2013, 3 out of 5 stars More…

Depart in Peace, with the Saints (Kontakion)

Benjamin Britten, Matthew Barley: Since She Whom I Loved

Recording of the Week,  Little Britten

Cellist Matthew Barley marks the centenary of the composer’s birth with a recital centring on the Third Cello Suite, whilst Edward Higginbottom and The Choir of New College Oxford bring a vital, pleasingly rough-round-the-edges approach that recalls Britten’s own children’s choirs to the scared choral music.

Matthew Barley further proves his reputation as one of the UK's most innovative and creative performers with the new programme and CD Around Britten – celebrating the centenary of Britten's birth with a selection of his works, including the Third Cello Suite and pieces by Sir John Tavener and Gavin Bryars.

The release coincides with the start of a tour of 100 events taking Britten's music to a kaleidoscopic variety of venues around the UK, reaching a huge cross section of British society. As well as concerts in conventional concert halls, Matthew will play in galleries, a cafe, a woodland in Devon, a number of cathedrals (including Canterbury), around 12 different National Trust properties and Britten's library at the Red House in Aldeburgh. The events will be featured across the year in BBC Music Magazine, and one concert will be broadcast on BBC Radio 3. (details of the events can be found here - http://www.matthewbarley.com/?page_id=740).

His performance of the Britten lets the light in on what can seem a rather obscure, labyrinthine work: Barley's clear, calm approach lays out the score before us...The rest of the disc is like entering the chill-out room: Barley's well crafted, multi-tracked cello arrangements of Britten's folk songs and 'Concord' from Gloriana will appeal to many.

This will surely go down as one of the more offbeat centenary tributes to Britten. Barley, an unclassifiable cellist, builds his anthology around a thoughtful performance of Britten’s Third Suit for cello and the “quietly radiating peace” he finds in it.

As always, Barley's playing is fearless. The disc is a voyage around the cello as well as around Britten, and one that never becomes relentless. In his Improvisation, there is skilfully woven reference to the profusion of styles in which he plays...The high point, though, is Barley's arrangement of 'Since she whom I loved'. Even without the words, Barley has managed to capture - and further amplify - its great sadness and isolation.

If a disc based on a funeral chant sounds rather elegiac, well - I suppose it is, rather, but it’s suffused with a rapt, meditative quality that makes for wonderful late-night listening and there’s a splendidly boisterous arrangement of ‘Oliver Cromwell’ to round things off!