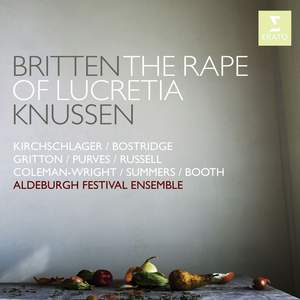 Britten: Rape of Lucretia, Act I, Scene I

Rome is now ruled by the Etruscan upstart

It is an axiom among kings

Here the thirsty evening has drunk the wine of light

Who reaches heaven first is the best philosopher

Maria was unmasked at a masked ball

Tarquinius does not dare

My horse! My horse! - Interlude: Tarquinius does not wait

Listen! I heard a knock

Ah... Time treads upon the hands of women

The oatmeal slippers of sleep

Lucia runs to the door

The prosperity of the Etruscans was due

She sleeps as a rose upon the night

Within this frail crucible of light

Interlude: Here in this scene you see

Oh! What a lovely day!

Flowers bring to every year

You were right. Tarquinius took one of the horses

Lucretia! O, never again must we two dare to part

Epilogue: Is it all?

Recording of the Week,  Looking ahead to 2013 - Verdi, Britten and Wagner

Previews of boxed sets and new recordings marking next year’s three significant anniversaries, including The Rape of Lucretia from Oliver Knussen (starring Ian Bostridge and Angelika Kirchschlager), Wagner scenes from Jonas Kaufmann, and a comprehensive Verdi collection from EMI Classics.

Recorded live in 2011 at the Aldeburgh Festival, which Benjamin Britten founded in 1948, this performance of his dark, intense chamber opera The Rape of Lucretia stars Angelika Kirchschlager, Peter Coleman-Wright and Ian Bostridge, with Oliver Knussen conducting. “Everything, without exception, was right on the money,” said The Guardian,” ... a dazzling success.”

Benjamin Britten’s chamber opera The Rape of Lucretia was given its premiere at the Glyndebourne Festival in 1946, with Kathleen Ferrier in the leading role. The composer founded his own festival two years later in Aldeburgh on the Suffolk coast, where he and Peter Pears had a home. This recording is drawn from a concert given in June 2011 at Aldeburgh’s acoustically superb Snape Maltings.

“As this brilliantly vivid, impassioned concert performance reminded us,” wrote The Telegraph, “Lucretia is a problematic and disturbing piece. It's hard to think of another opera where the opposite poles of male violence and tender female intimacy are made so vividly real in purely musical terms, and brought into such horrifying proximity.”

Representing those opposite poles are the Australian baritone Peter Coleman-Wright as the Roman prince Tarquinius and the Austrian mezzo-soprano Angelika Kirchschlager as Lucretia, the chaste wife of a Roman general. She commits suicide after Tarquinius has raped her, but, in an interview with The Independent Kirchschlager explained that: "There is absolutely a subtext. Lucretia is not happy where she is; both she and Tarquinius are longing for something more. People are not black and white: we long for things we don't allow ourselves. Perhaps these two should be a real couple, but circumstances have determined that they can't be together. You have to look carefully at the words and at every nuance Britten wrote, and it makes sense. They are both incredibly passionate people and Lucretia is a strong woman. I never see her as a victim."

Joining them in the cast are some of Britain’s finest singers, including Ian Bostridge as the Male Chorus, Susan Gritton as the Female Chorus and, as Collatinus, Christopher Purves; the Aldeburgh Festival Ensemble is conducted by Oliver Knussen.

The Guardian felt that the performance succeeded in “revealing the score as one of Britten's richest ... Everything, without exception, was right on the money. Bostridge and Gritton vied with each other for clarity of diction and gesture, while Kirchschlager's magnificent Lucretia was direct and powerfully sympathetic. Claire Booth and Hilary Summers, as maid and nurse respectively, sent the mellifluous flower duet wafting seductively around the Maltings' rafters. Best of all was the orchestra, revelling in its extraordinary palette of colours, and showing how the score so often hangs like gossamer off the vocal lines. Oliver Knussen conducted neatly, precisely and economically – in short, giving his players and singers everything they needed to make Britten's return to Aldeburgh a dazzling success.”

“Britten's amazingly inventive score was played with scalding intensity by the Aldeburgh Festival Ensemble under Oliver Knussen,” enthused The Telegraph, while The Independent, describing the opera as “a masterpiece of psychological and musical acuity”, observed that: “Ian Bostridge and Angelika Kirchschlager, as the Male Chorus and protagonist, gave it a searing, declamatory force. But its chief glory lies in the menacing beauty of its orchestral sound: the textures which Oliver Knussen extracted from the Aldeburgh Festival Ensemble repeatedly took the breath away.” Likewise, The Sunday Times praised “Oliver Knussen's incisive and compelling conducting. He clearly believes in every note of the often ravishingly beautiful and coruscatingly violent score.”

Although the story's brutality inevitably means that any performance of Lucretia is uncomfortable, Knussen and company ensure that Britten's score shines in a radiantly positive light, offsetting the skin-crawling nastiness with musical beauty

Knussen draws out not only the pungency of Britten’s language but also its almost touchable beauty and Mediterranean warmth...Kirchschlager is a Lucretia of contrasting purity and sensuousness...All in all, it’s hard to imagine a more welcome addition to the Britten discography in his centenary year.

Knussen's keen sense of pacing tells in the grip of the drama...[Kirchschlager] is the lightning rod for the electricity of the drama...she creates a Lucretia entirely her own - not so much a formal classical Greek heroine, more a modern woman whose feelings are very close to the surface...this new Virgin set ranks as one of the very best of the new generation of Britten opera recordings.

The folding of the linen is a real highlight of this recording, a definite improvement on Britten’s own reading in its sense of timeless suspension... Knussen yields nothing whatsoever to Britten in his careful pacing of the score, and the newer recording does enable us to hear details that were muffled before...a tremendous recording for a new generation

an absolutely riveting account...Bostridge is spellbinding from the very first bars in the Evangelist-like role of the Male Chorus, wringing every drop of terror and beauty from his narrative: in fact what makes this recording so special is the balance it strikes between the brutal and the lyrical elements of Britten’s score...Kirchschlager sings a passionate and distinctly unmatronly Lucretia.

I have rarely been as conscious of the salivating voyeurism with which the librettist Ronald Duncan describes the rape as in Ian Bostridge’s brilliantly creepy singing of the Male Chorus’s graphic description of Tarquinius’s rampant machismo, nor as gripped and moved as by Angelika Kirchschlager’s feisty but fruitless self-defence...Knussen’s conducting is exemplary.

[the score] emerges more pungent and fiercely dramatic than I've ever heard it before...the protagonists in the drama are presented in all their contradictions...this performance is surely the best of recent times, redemptive in a way that the work itself can never be.

the opera’s musical strengths stand taller than ever before, helped by the vivid accompaniment of the Aldeburgh Festival Ensemble...Kirchschlager’s heroine combines sensuous appeal with gut-wrenching horror, while Peter Coleman-Wright’s bestial Tarquinius definitely belongs behind bars...Overall, the recording’s triumph is to make the opera seem horrible, certainly, but not inhumane.