Following their debut recording of sonate da camera by Giovanni Stefano Carbonelli (which was a Presto Recording of the Year in 2017), Bojan Čičić and his Illyria Consort turn their attention to the music of another neglected virtuoso violinist of the eighteenth century: the mercurial Giovanni Giornovich, who numbered Mozart, Haydn and Dittersdorf among his friends and colleagues. I spoke to Bojan last month about Giornovich’s shifting identities, his volatile personal life, and the stylistic innovations which play out in the concertos composed during his time in London.

‘Giovanni Giornovich’ went by a variety of aliases in the course of his career: why did you opt for the Italianised version of his name on the album?

I think the most important reason is that it’s true! His entire history is very sketchy, but it’s certainly more true than the Croatian version, 'Ivan Jarnović'. We know that he was baptised in Palermo, which suggests that he was born pretty close by, as children at the time were usually baptised three days after they were born. The whole story of the connection with Croatia came about due to his friend Adalbert Gyrowetz, who wrote his biography in 1848: Gyrowetz writes that Giornovich was born 'in the waters of Ragusa', which was the Italian name for Dubrovnik, but Ragusa Superiore is also a village in Sicily which was about 30 kilometres from the coast! That ambiguity certainly adds to the confusion: surely a baby born at sea would be baptised in a coastline village? But what we do know is that Giornovich was responsible for giving himself different surnames, in Polish, Czech, Italian, French, and Russian.

Were those modifications of his name a marketing strategy, or were there deeper political motivations?

Perhaps at the beginning it was a marketing strategy - he started his career in Le Concert Spirituel in Paris in the 1770s, where he stayed until the end of the decade, and that might have enticed the Parisian aristocracy to go to his concerts. But everything in his violin style seems to be Italian in terms of technique; the fact that he was claimed to be the most famous pupil of Antonio Lolli means that maybe he did grow up in Italy somewhere, but he was always very quiet about it, and perhaps it was simply nobody asked him about his background until much later. Nobody really knew where he was from, but everybody was from everywhere at that time, and nobody cared!

That phrase 'citizen of the world', which is so mis-used and abused today, had a very tangible meaning for the artists of that generation. There was a time after the French Revolution when England was a place where you could not only succeed but also be safe, and there were very few of those left in Europe. Composers like Viotti came here because they didn’t have to worry about the consequences of the French Revolution as in other parts of the world (such as Germany or Italy, where they felt that a new revolution was about to happen); Haydn came here, I think, because Austria was on the side of England, hence the popularity of his national anthem. My feeling is that Giornovich stayed here until he become unpopular, and I think everybody with a French passport became a little unpopular towards the end of the century because of the French Revolutionary Wars. So it wasn’t always peachy for them, but he certainly had freedom of movement – he played with Mozart and Dittersdorf in Vienna, who said that he possessed the nicest sound he ever heard on the violin.

Does that emphasis on beauty of sound take precedence over overt virtuosity in these concertos?

It’s not perhaps the Viotti style of virtuosity, which comes a generation afterwards, but it is very hard – it certainly took a lot of takes! Perhaps his earlier concertos from Paris and Germany were a bit more virtuosic in their demands, but what we see in these works on the album (which he composed in his forties) is the very clear influence of Russian traditional music. The slow movements of Concertos Nos. 14 and 13 are based on Russian folk tunes, and I have a Russian student who recognised them immediately! The collection from which Giornovich takes his melody in the slow movement of No. 13 was published by Vasily Trutovsky, whilst the Kamarinskaya tune which appears in the third movement of the same concerto was also used by Haydn in his Andante Cantabile of Die Flötenuhr for mechanical instrument (Hob. XIX/4) in 1772.

There was a whole mixture of tunes sweeping across Europe at the time, but in Giornovich's case I think he actually spent some time in Saint Petersburg before moving to England in 1787, where he lived for six years in London and then in Bath; he eventually returned to Saint Petersburg and ended up as a private musician of Catherine the Great. After Giornovich’s death in St Petersburg in 1804, he was honoured with a grand funeral, which included a performance of a Requiem by the Polish composer Osip Kozlowsly; the piece had been composed a few years before for the passing of the Polish King Stanislaw August, who also resided in St Petersburg at the time of his death.

Did his personal qualities also contribute to his itinerancy?

He certainly had problems. I don’t know if it’s an urban myth, but the story goes that Giornovich asked Chevalier de Saint-Georges (who was a master swordsman and would almost certainly have destroyed him) for a duel and Saint-Georges refused, saying ‘I respect your talent too much to kill you’. There’s also a story dating from his time in London involving the young violinist Pascal Pieltain; Pieltain said he was a better player than Giornovich, and Giornovich responded by completely losing his temper and biting him on the nose, which seems a pretty extreme reaction! He also got into trouble with the aristocracy, because he just couldn’t deal with anyone not showing him what he considered to be appropriate respect: if he arrived at the residence of a duke or marquis to perform after dinner and was offered food in the kitchen rather than with the aristocracy, he would just refuse to perform and walk away. And at a time where musicians were protected by aristocracy or the Church, you simply can’t do that! Eventually he ran out of supporters and friends in Paris, and that’s why he had to leave towards the end of the 1770s.

The music itself seems to have a serenity that seems at odds with the anecdotes about his volatility...

I think perhaps today he would be described as bipolar. I keep coming back to that comment by Dittersdorf about his sound, which wasn’t necessarily virtuosic but was simply very beautiful. Mozart, too, seems to have liked him; the two of them played together in Vienna, and Mozart obviously wasn’t critical of his compositional technique. It’s nice to think that the people who we consider as the very greatest musicians were able to appreciate other composers of the time for who they were rather than who we want them to be; I’m not saying that his fall into neglect was undeserved, but for me this recording was a chance to showcase a composer whose music I grew up with.

So Giornovich was a relatively familiar figure in Croatia in the late twentieth century, despite his low profile elsewhere?

Very few musicologists outside ex-Yugoslavia know of him, but a lot of work was done by Croatian musicologists in the 1950s, following on from the nineteenth century when people still knew of his name. I got to know the first ten concertos when I was growing up in Croatia; they were published, and also recorded by a young student orchestra in America in the 1980s or 90s, because they were seen as good preparation for Mozart.

I played Nos. 13 and 14 in Croatia about three or four years ago, at a symposium on travelling musicians, and then I realised that Nos. 15 and 16 are kept in the British Library. These are facsimile editions from either late eighteenth or early nineteenth centuries, which I had made into a modern edition (in fact we were still correcting odd mistakes during the recording!). It wasn't possible to include all four concertos on a single CD, so I had to make a decision between Nos. 15 and 16; No. 16 was the concerto which Giornovich performed most often himself (it’s nicknamed Il Favori), but I opted for No. 15, as it seemed a better and more virtuosic work.

Do you get the impression that he tailored these concertos for London tastes?

No - in fact there is a review of a London performance of No. 14 which mentions that the audience laughed! But I don’t think it was malicious laughter: it was just a very unexpected thing to hear a composer from the Italian violin school throwing Russian influences into the mix. His other innovation was in the introduction of the Romance as a concerto movement, which endured well into the nineteenth century. All of the concertos were published in Paris (with Zieber) and Germany as well as in London - but in the light of the fact that he lived here for seven years and the facsimile editions are kept in the British Library, it made sense to group them under one title for the recording.

Do you get any sense of him having any influence over subsequent generations of composers, or was his popularity too short-lived for that?

George Bridgewater, the famous Afro-English virtuoso, claimed that Giornovich was his teacher, and I’d quite like to explore his music next… 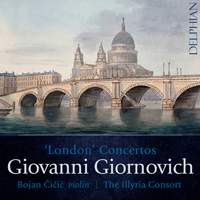 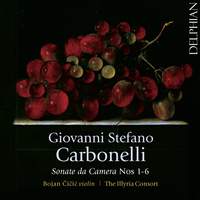 Čičić's debut recording with The Illyria Consort was a Presto Recording of the Year in 2017 and was described as 'a full house of deliciousness' by Gramophone. The second volume of Carbonelli's Sonate da Camera will be released on Delphian this July.