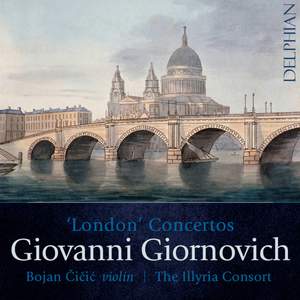 Čičić acquits himself well in the tricky violin writing, and the lean-sounding Illyria Consort is on its toes. — BBC Music Magazine, May 2019, 4 out of 5 stars More…

Giovanni Giornovichi: Violin Concerto No. 13 in A Major

Giovanni Giornovichi: Violin Concerto No. 14 in A Major

The Croatian violinist talks to Katherine about his recent recording of the volatile violinist-composer's 'London' concertos, released on Delphian last Friday.

Giovanni Giornovich was one of the most colourful and popular violin virtuosos of his day.

Apparently of Croatian descent, he was seemingly known by a different name in every country he toured (Ivan Jarnović and Giovanni Giornovichi, among some thirty variants), deliberately making the most of his mysterious origins.

More mysterious still is why these concertos – full of wit, charm and character, and redolent of the international musical life of Haydn’s London in the 1790s – should have waited so long to be recorded. Modern-day virtuoso Bojan Čičić and his Illyria Consort, fresh from their triumphant revival of the sonatas of Giovanni Stefano Carbonelli on Delphian, are ideal champions to bring this delightful music back to life.

Čičić acquits himself well in the tricky violin writing, and the lean-sounding Illyria Consort is on its toes.

Čičić is a clean and assured soloist, well on top of the technical, often high-lying writing Giornovich puts his way. The tone of his period violin will sound thin to people used to modern-instrument Beethoven Romances, but it doesn’t take long to adjust. The Illyria Consort is a small orchestra without sounding particularly so on this recording … this disc is well worth hearing, especially for fans of the Classical period.

Čičić proves a highly compelling and convincing soloist throughout, playing both with passion and real exhilaration, and, most importantly, with a seemingly innate empathy for Giornovich’s music, and especially the way it might have been played at the time. For their part, the Illyria Consort provides the perfect accompaniment, achieving an ensemble of the very highest order, and maintaining impeccable balance with the soloist at every dynamic level.

Giornovich himself may have been a troubled, volatile character, but these three works from the 1790s radiate sunny, open-hearted optimism, with whispers of his friend Mozart’s amiable A major concerto creeping in here and there; Čičič’s honey-sweet tone recalls Dittersdorf’s remarks about the composer’s own particular beauty of timbre, and the folksy Villageoises de Julie (based on an air from an opéra comique by Nicolas Dezède) which closes the album is a delight.

A thrilling musical discovery … Bojan Čičić has this repertoire in his blood, and this shows in performances of exhilarating beauty. Indeed, his readings are consistently sophisticated and he never pushes things beyond what is really necessary to bring out the many gentle nuances of these pieces. The softly glowing Illyria Consort give sympathetic support. A thrilling musical discovery in superb sound quality and enriching annotations.