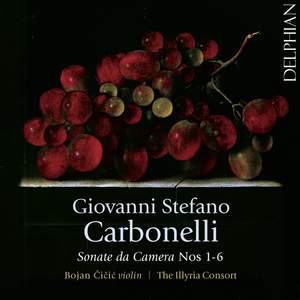 Carbonelli: Sonate da camera No. 6 in A Major

The Croatian baroque violinist talks to Katherine about recording the Italian virtuoso's sonate da camera, out later this month on Delphian.

In certain respects, Giovanni Stefano Carbonelli does not quite fit the eighteenth-century mould. For a neo-Corellian, he is unusually fond of complexity, both technical and compositional, and also unusually open to other contemporary influences, such as those of Handel and Vivaldi.

But the quality of his music speaks for itself – virtuosic and joyously melodic, these six ‘chamber sonatas’ had a huge impact on Delphian producer Paul Baxter. Carbonelli’s difficulty has ensured that his work is seldom played, but early-music rising star Bojan Čičić makes sure we have no sense of that as he and his Illyria Consort colleagues champion these groundbreaking compositions with exuberant confidence. Bojan Čičić is leader of Florilegium and frequently guest directs the Academy of Ancient Music and European Union Baroque Orchestra. He founded The Illyria Consort to explore rare repertoire of the seventeenth and eighteenth centuries. This is their first recording.

Čičić's distinctive sound - sweet, slightly dry and exquisitely centred - is ideal for the taut beauty of Carbonelli's solo lines. Crucially, Čičić fleshes out the composer's ideas, filling rests and cadences with large dollops of his own making. His band helps him enormously, not least with their additions and sexy realisations. The future of the Illyria Consort is bright.

Given that the writing is not overtly flashy, Čičić’s easy, fluid perfection through their webs of double-stopped complexities merits mentioning…add tonal colour spamming the gamut from satisfyingly wiry to full and sweet, and it’s a full house of deliciousness, all of which is bolstered further by the varied palette of continuo colour on display from Čičić’s Illyria Consort colleagues…really, bravo to the whole

It’s testament to Čičić’s artistry that you’re never aware of the difficulties being surmounted – fistfuls of the most awkwardly-written chords are dispatched with immaculate intonation and voicing, whilst the contrapuntal sections in the elaborate fugues have a clarity to rival the finest keyboard-player. I’d wager a tidy sum that I won’t be the only one to come away from this beautiful disc itching to hear more from both composer and performers.

[Carbonelli's] music is stately, taut and elegant in the hands of Bojan Čičić (a UK-based Croatian violinist) and his excellent Illyria Consort. They sound effortlessly stylish in these six chamber sonatas – Čičić makes even the high-wire showy stuff sing with a lyricism that is shapely, aerated and totally unforced.

More complex structurally than works by many of his contemporaries, [Carbonelli's compositions] give Cicic and his ensemble every opportunity to shine.

Although the Illyria Consort...are crisp and dynamic, this sparkling recording is a showcase for Croatian violinist Bojan Cicic...whose championing of Carbonelli is the real story here.

The music has a unique appeal – lively, restless, catchy and extremely well written. The long-forgotten Carbonelli is a major find by a boutique label, Delphian, a Scottish firm that rarely issues a dud disc.

These performances are eloquent, engaging and really nicely ornamented. It's one of my favourite discoveries this week.