Bridget Cunningham's London Early Opera go from strength to strength with their second release - the focus once again on Handel, but with the scene shifted from Italy to London's famous Vauxhall Gardens. A surprisingly detailed historical record exists of the musical entertainments on offer at the Gardens in Handel's time, and Bridget and her musicians have decided to recreate one of these concerts as faithfully as possible.

I caught up with Bridget to find out more about this project, and about the musical and social history of the Gardens...

The sleeve notes seem keen to dispel the idea that Handel’s compositions for Vauxhall were just wallpaper music. Yet at the same time, Gardens historian David Coke points out that Pepys and others went to the gardens with other things than music on their minds – just as opera overtures, although composed and performed to a high standard, were nevertheless often disregarded and talked over by audiences more interested in socialising and showpiece arias. How do you square this circle?

This new CD, Handel at Vauxhall Vol. 1 reconstructs a concert at Vauxhall Gardens much later in the 1740s after the new proprietor and patron of the Arts, Jonathan Tyers had completely transformed and rejuvenated the gardens so that they became the most splendid and significant in the world. As conductor and Handel scholar myself with leading historian David E Coke, we wanted for the first time ever, to capture the essence of a musical evening in the 1740s when the concert structure had become more formalized. Each night, sophisticated organ concertos, instrumental pieces, arias, marches and dances were performed as well as the lighter popular and political songs by the very best British musicians and singers who themselves travelled to get there each night. New buildings and instruments had been installed for this very purpose and a Director of Musician and’ in house’ composers were employed to work there, probably under the watchful eye of Handel.

Samuel Pepys’s visits to Vauxhall were much earlier in the 17th century, long before Vauxhall’s music was formalised in this newly installed Orchestra building. In Pepys’s day, the music, if any, was provided by buskers, wandering bands, other visitors, and the occasional strumpet singing lewd or comic songs. Even in Tyers’s time in the eighteenth century, one of the great attractions of Vauxhall’s concerts was that the audience could choose to promenade, socialise and view the ornate statues and installations, the fountains and arched walks in the illuminations of the glittering gardens, listen to the birdsong as well as this sophisticated music, similar to that from the London theatres and concert halls, but in English.

This disc is rather tantalising – the Vauxhall concerts were so extensive that you’ve only managed to fit the first half onto the disc. Will the next volume contain the other half – and if so, was it an artistic decision to split up what could otherwise have been a double-disc release, or a pragmatic one?

I think you have really answered it yourself by saying how tantalising it is – you are meant to be tantalised! At Vauxhall at this time, a set of 16 pieces was usually included each night. Therefore the next CD, Handel at Vauxhall Vol.2 reconstructs the second half of an evening's concert with another 8 pieces plus bonus tracks with music by Boyce, Gladwin, Lampe, Stanley and Handel.

The decision to release these separately was based on concluding sufficient detailed research for the whole of the Vauxhall project, planning the recording and intertwining it in a whole new series of Handel discs (see Handel in Italy Vol.1 Signum Records). These CDs are musical snapshots capturing significant musical moments in Handel’s life through the full compass of his travels. This recording project delves deeper and looks at Handel the man, placing him in a historical context and with the important extensive cd booklet, unrecorded music, poetry and illustrations, setting the scene and providing a fuller picture for the listener.

How well do you think the decidedly hedonistic suggestions of The Advice sit with Jonathan Tyers’ mission to turn Vauxhall into a morally improving experience? Did Handel manage to slip this one past some censors, or was 18th-Century London less strait-laced than we tend to think?

The Advice is a light song from the Muses Delight and these type of songs contain much humour as well as political, personal or satirical messages that we might not necessarily fully understand today.

Jonathan Tyers was a brilliant businessman and public relations innovator. He ensured that his reputation for ‘cleaning up’ Vauxhall was widespread, so that people felt safe taking their wives and children there and wanted the arts and music to be morally redemptive and to civilise people. Even after dark, the central ‘Grove’ around the Orchestra was always safe, and was patrolled by Tyers’s constables to make sure nobody was put at risk from danger including the Prince of Wales who was a frequent visitor. The music was intended for everyone to enjoy, from all members of society who would recognize the tunes and understand the hidden meanings and humour in the texts.

Your solution to the ‘artificial bird problem’ for Hush, ye pretty warbling choir seems to fit well with the music, especially the recorder obbligato – but how confident are you that it’s faithful to the original performance in Vauxhall?

We really don’t know about the original ‘birdsong’, because there is no recording of it or description of the mechanism and sadly no similar English organ has survived with these mechanisms. However, as you say, the bird whistle we had especially made, with the sopranino recorder and the chamber organ, make it sound ‘right’ in the recording, and it must be a reasonably close approximation of what was heard then, mainly because blowing a whistle or small organ pipe through water is the best and easiest low-tech way of imitating birdsong. Indeed in the eighteenth century along the Dark Walk at Vauxhall Pleasure Gardens, many visitors enjoyed hearing the Nightingales and Ravens singing and rumours were rife that if the birds were not present, artificial bird sounds would be recreated.

There seems to be quite a trend among historically-informed groups at the moment to try to recreate specific events, either hypothetical (as with Rinaldo Alessandrini’s St Mark Vespers) or historical (for instance Robert King’s recent Israel in Egypt), and this disc seems very much part of this current. Why do you think so many people are adopting this ultra-specific approach to authenticism?

I think this is partly to give a purpose and context to the music. Most classical music today has irrevocably lost its original context, and its original sound; giving it a specific time or event helps us to understand why the music was written, and what its contemporary audience may have thought of it.

In the case of ‘Handel at Vauxhall’, we really wanted to get away from the type of recording that tried to reproduce ‘Vauxhall Music’ throughout the history of the gardens; this, to us, made no sense at all. By coupling Thomas Arne with Henry Rowley Bishop, we learn nothing about the music or about Vauxhall Gardens; if we look more closely at a specific period in the gardens’ history, we create a much more cogent and meaningful story. And it is a story which complements what we already know about the architecture, the design, the social life and even the refreshments of that time. We know that we can never be entirely ‘authentic’, and we are, in any case, living in completely different times with different expectations and experiences. However, Jonathan Tyers intended the music at Vauxhall Pleasure Gardens to be entertaining and enjoyable, with an undertow of education and civilisation; maybe we can, at least, achieve similar aims for our modern audience! 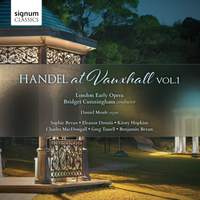 Volume 1 of Handel at Vauxhall was released in March on Signum. 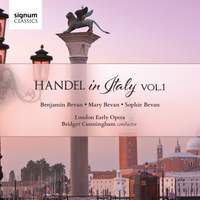 The previous volume in this series, Handel in Italy, Vol. 1, was released in Summer 2015.