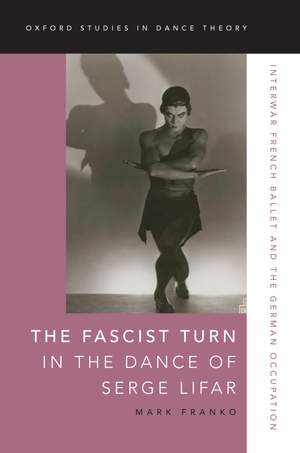 The Fascist Turn in the Dance of Serge Lifar: Interwar French Ballet and the German Occupation

This is an exceptionally rigorous work presenting multitude of arguments, sources and methodologies, which present some much-needed conclusions for open historiographical answers yet open new... — Dance Research Journal More…

Ukrainian dancer and choreographer Serge Lifar (1905-86) is recognized both as the modernizer of French ballet in the twentieth century and as the keeper of the flame of the classical tradition upon which the glory of French ballet was founded. Having migrated to France from Russia in 1923 to join Diaghilev's Ballets Russes, Lifar was appointed star dancer and ballet director at the Paris Opera in 1930. Despite being rather unpopular with the French press at the start of his appointment, Lifar came to dominate the Parisian dance scene-through his publications as well as his dancing and choreography-until the end of the Second World War, reaching the height of his fame under the German occupation of Paris (1940-44). Rumors of his collaborationism having remained inconclusive throughout the postwar era, Lifar retired in 1958. This book not only reassesses Lifar's career, both aesthetically and politically, but also provides a broader reevaluation of the situation of dance-specifically balletic neoclassicism-in the first half of the twentieth century. The Fascist Turn in the Dance of Serge Lifar is the first book not only to discuss the resistance to Lifar in the French press at the start of his much-mythologized career, but also the first to present substantial evidence of Lifar's collaborationism and relate it to his artistic profile during the preceding decade. In examining the political significance of the critical discussion of Lifar's body and technique, author Mark Franko provides the ground upon which to understand the narcissistic and heroic images of Lifar in the 1930s as prefiguring the role he would play in the occupation. Through extensive archival research into unpublished documents of the era, police reports, the transcript of his postwar trial and rarely cited newspaper columns Lifar wrote, Franko reconstructs the dancer's political activities, political convictions, and political ambitions during the Occupation.

This is an exceptionally rigorous work presenting multitude of arguments, sources and methodologies, which present some much-needed conclusions for open historiographical answers yet open new questions