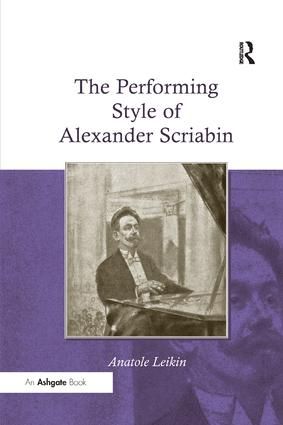 The Performing Style of Alexander Scriabin

When Alexander Nikolayevich Scriabin's music was performed during his lifetime, it always elicited ecstatic responses from the listeners. Wilhelm Gericke, conductor of the Vienna opera, rushed backstage after one of Scriabin's concerts and fell on his knees crying, 'It's genius, it's genius...'. After the composer's death in 1915, however, his music steadily lost the captivating appeal it once held. The main reason for this drastic change in the listeners' attitude is an enormous gap existing between the printed scores of Scriabin's music and the way the composer himself played his works. Apparently, what Scriabin's audiences heard at the time was significantly different from, and vastly superior to, modern performances that are based primarily on published scores. Scriabin recorded nineteen of his compositions on the Hupfeld and Welte-Mignon reproducing pianos in 1908 and 1910, respectively. Full score transcriptions of the piano rolls, which are included in the book, provide many substantial features of Scriabin's performance: exact pitches and their timing against each other, rhythms, tempo fluctuations, articulation, dynamics and essential pedal application. Using these transcriptions and other historical documents as the groundwork for his research, Anatole Leikin explores Scriabin's performing style within the broader context of Romantic performance practice.