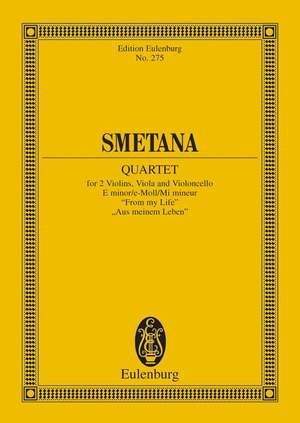 In a letter of 12th April, 1878 (i.e. when he had already lost his hearing), the composer declares that his design was to symbolize the course of his life in this quartet.1st Movement: Love of art in youth, the unsatisfied longing for something inexpressible, also a presentment of approaching mis-fortune.2nd Movement: Quasi Polka refers to a merry youth during which Smetana enjoyed dancing passionately and wrote dances with ease.3rd Movement: Largo sostenuto, the felicity of his first love for the girl who later became his wife.4th Movement: Illustrates his perception of national music and the joy of success, only to be suddenly broken by the extend E in the highest register, the fatal note that sounded in the composer's ear just before his deafness. Painful remembrances of the first stages of his career, a fleeting ray of hope, then ultimately resignation to inescapable fate.