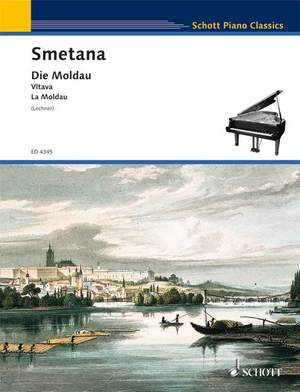 Smetana's 'Vlatava' can be regarded as a prime example of programme music. The composition is a hymn to Smetana's home country of Bohemia, describing the course of the river Vltava from the source to its junction with the river Elbe.The work describes the course of the river Vltava starting from the two small sources of the warm Vltava and the cold Vltava until the two streams merge. The course of the Vltava is through forests and meadows and further through the landscape where many merry celebrations are being held; a dance of the water nymphs in the moonlight, castles, magnificent houses and ruins proudly appearing on nearby rocks; the Vltava forming eddies in the rapids of St. Johann, flowing as a large river toward Prague until the fortress of Vysehrad appear, and eventually disappearing in the distance to flow majestically into the river Elbe. (B. Smetana)