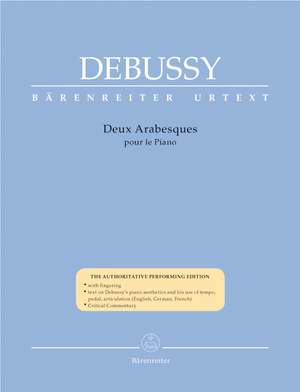 Close on the heels of Regina Back’s critical edition of Debussy’s Children’s Corner come the equally popular Deux Arabesques in the definitive Urtext performing edition. These two jewels of the piano literature were first published in 1891 and made available at the time in a relatively small print run of 300 copies. In 1903 the French publisher Durand attempting to capitalize on Debussy’s quickly growing fame published the Arabesque No.1 in an advertisement in Le Figaro and between 1904 and the new engraving with corrections and revisions in 1912 more than 50,000 copies were sold!

Bärenreiter’s new Urtext edition while drawing on all known sources, documents the geneses of the compositions until 1912 and the new edition is based on this corrected 1912 re-engraving.